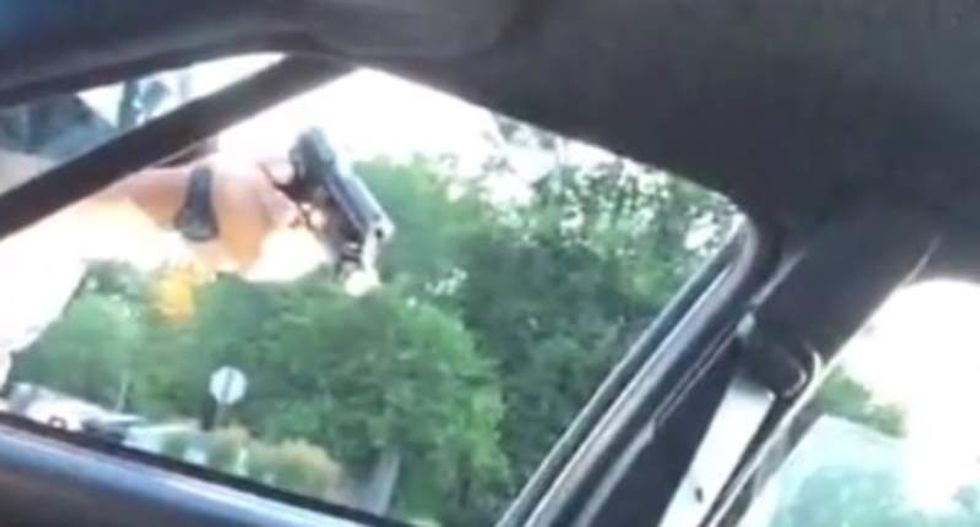 Footage posted by Lavish Reynolds on Wednesday shows an unidentified police officer still pointing his gun at her and her boyfriend after shooting him. (Facebook)

A Minnesota woman documented the aftermath of her boyfriend's shooting at the hands of a police officer during a traffic stop for what she called a "busted taillight," the Minneapolis Star-Tribune reported.

Note: The video shown in this story is graphic in nature.

Lavish Reynolds' video shows her boyfriend, who is not identified, slumped in a car next to her while bleeding. When the officer asked him for his license and registration, she says, the man said they were in his wallet, while also informing him that he was also carrying a gun, for which he had a permit.

"The officer said don't move," Reynolds explains. "As he was putting his hands back up, the officer shot him in the arm four or five times."

The camera then captures the officer still standing outside the car and pointing his gun at the couple. It is unclear whether he called for help by the time Reynolds began recording the encounter

"F*ck!" the officer can be heard yelling. "I told him not to reach for it. I told him to keep his hand open."

"You told him to get his ID, sir, and his license," Reynolds responds.

As she worries aloud whether her boyfriend is dying next to her, the officer can be heard ordering her, "Keep your hands where they are."

"You shot four bullets into him, sir," she tells the officer as her boyfriend's breathing sounds strained. "He was just getting his license and registration, sir."

Another officer can then be heard ordering Reynolds to exit the car with her hands up. When she asks where her daughter is, the second officer orders her to turn away from him and walk backwards. She is then ordered to get on her knees.

"Please don't tell me she's gone," she can be heard saying, before she begins yelling in anguish. Seconds later, the first officer can be heard yelling, "F*ck!" again.

Later in the video, Reynolds says she is in the back of a police car with her daughter.

The Star-Tribune reported that Reynolds' boyfriend was hospitalized. His condition has not been listed. According to her, the victim works for the public school district in St. Paul.

"He's never been in jail, anything," Reynolds says at one point. "He's not a gang member, anything."

Reynolds originally uploaded the video to her Facebook page, but it was taken down late Wednesday night. However, it has already surfaced on YouTube. Note: It is graphic in nature.

Pa. school district fires teacher who put tape reading ‘I have nothing nice to say’ on a student’s face

PHILADELPHIA — The Coatesville Area School District has fired a middle school teacher who put a piece of tape reading “I have nothing nice to say” on a student’s face last month — an action the district described as humiliating to the child, but that the teacher defended as an ill-conceived joke. At a meeting Tuesday night, the district’s school board voted 7-1 to dismiss Audra Ritter, a special education and English language arts teacher at North Brandywine Middle School. Board members did not discuss the dismissal. According to the district, Ritter — who is also president of the district’s t...