Mistrust of Clinton on trade shadows her at Democratic convention 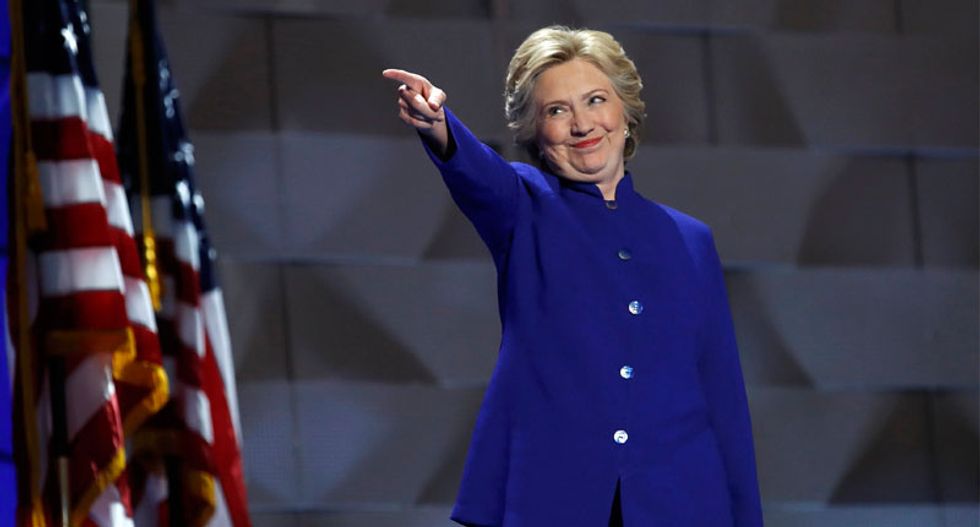 Democratic presidential nominee Hillary Clinton points at President Barack Obama as she arrives onstage at the end of his speech on the third night of the 2016 Democratic National Convention in Philadelphia, Pennsylvania U.S., July 27, 2016. REUTERS/Jim Young

When it comes to trade policy, Hillary Clinton is taking heat from all sides.

At the Democratic National Convention this week, where Clinton will formally accept her party’s presidential nomination, opposition to trade deals was plastered on buttons, scrawled on signs and chanted by delegates. Many are worried by her past support of 1994 North American Free Trade Agreement and the Trans-Pacific Partnership, which is still awaiting congressional approval.

Things are unlikely to get any easier for her. Clinton has said her stance on trade has evolved, that she now opposes TPP because it does not do enough to protect jobs and that she wants changes in NAFTA, the trade deal her husband, Bill Clinton, signed during his presidency.

But that allows her Republican opponent, Donald Trump, to question her credibility, painting Clinton's evolving position as a desperate attempt to catch up with his tough stance.

Trump has vowed to force Canada and Mexico to renegotiate NAFTA, labeling it a job killer. The real estate developer has also said he would pull the United States out of the 12-nation TPP.

Even among the Democrats there are doubts about Clinton's resolve, particularly among supporters of her former Democratic rival, Bernie Sanders, the U.S. Senator from Vermont whose opposition to trade deals featured prominently in his speeches during the Democratic primary season.

The concern about trade was on display at the convention during a speech delivered on Wednesday night by Clinton's running mate, Tim Kaine, a U.S. senator from Virginia who once supported TPP. Delegates waved anti-TPP placards as Kaine spoke, even though he changed his position after joining Clinton's ticket.

Larry Cohen, a senior adviser to Sanders, said trade was “absolutely” a danger for Clinton in the race against Trump, saying she had to show her commitment to opposing it and not just “make pronouncements."

“The Trump campaign is smart enough that they will exploit this issue,” Cohen said.

Sanders supporters have said they intend to keep fighting TPP through the November election via a new group called “Our Revolution” that is dedicated to championing issues that Sanders pushed on the campaign trail.

The frustration that a post-recession recovery has failed to translate into better wages and opportunities for million of working Americans has become one of the leading themes of the 2016 presidential campaign.

A Reuters/Ipsos poll taken in March showed that 65 percent of Democrats and 70 percent of Republicans believed that trade cost some U.S. jobs even though many also agreed that trade helps to keep the costs of goods low.

Richard Trumka, president of the AFL-CIO labor federation, told Reuters that Clinton has told all of the major unions that endorsed her that she wanted to re-work NAFTA, echoing similar comments by Dennis Williams, president of the United Auto Workers union.

Trumka said Clinton's campaign has told him that she would take “a whole new approach” on trade and he said he was convinced that he could trust her on the issue. “She’s not giving lip service to it. She’s committed to it,” he said.

Consulted about Clinton's talks with unions regard NAFTA, a senior Mexican government official said the TPP already provided the United States with a platform to strengthen the rights of workers compared to NAFTA, although U.S. union activists say the new pact weakens rather than strengthens workers' protection.

"They have the solution in their hands, if they back it," the official said, noting Congress had yet to ratify the TPP.

The official added that it would be in Mexico's interests to strengthen the rules of origin in TPP that determine which country a product comes from, but sometimes allow foreign components in it. He cautioned, however, that re-opening trade deals was a highly complex undertaking.

“Were I advising her I'd suggest she try to thread the needle - explain that free trade has great benefits for the country as a whole, but past and pending agreements do not adequately recognize and compensate the losers. She will remedy that failure,” Fiorina said.

However, such nuanced approach may prove self-defeating in the light of Trump's challenge and internal dissent.

Robin Biro, a field director for the Democratic Party in Atlanta and a Clinton supporter, said TPP was a make or break issue for Clinton to attract Democrats who voted for Sanders in the primary.

"She's only going to get the support of the Bernie people if she comes out strongly on that issue,” Biro said.