MSNBC guest: Mike Pence is the 'most anti-abortion presidential or VP candidate we've had' 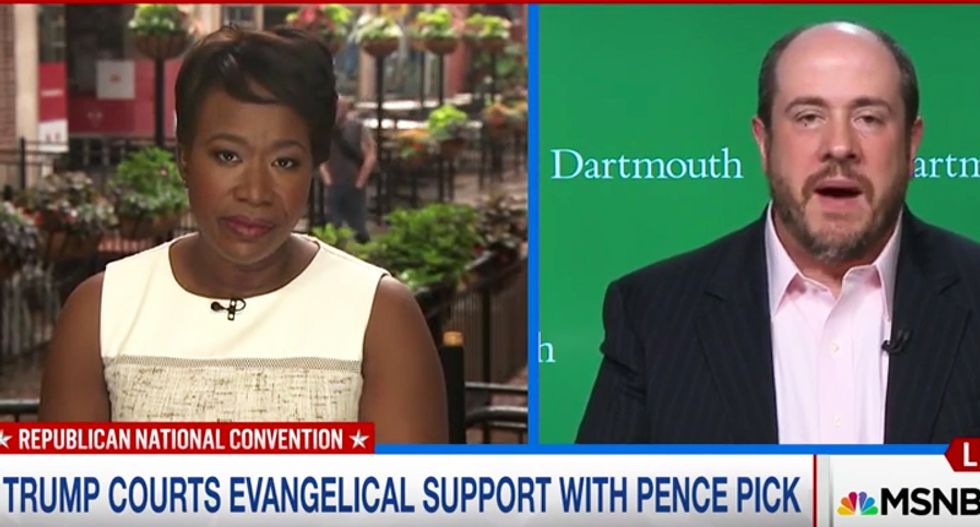 Appearing on MSNBC's AM Joy, Jeff Sharlet, an expert of Christian fundamentalism warned voters that Indiana Gov Mike Pence is an extreme conservative when it comes to reproductive rights, drastically cutting Planned Parenthood funding and shuttering clinics in his state during an HIV outbreak.

"He is probably the most anti-abortion presidential or VP candidate we've had," Sharlet told Reid, when asked about the fiscal conservative faction of the Republican party. "You see him also bringing in financial. He sees it if we don't stop abortion, our economy will collapse. So he's the guy who sort of stands in the middle between those two factions of the Republican Party."

Reid ran down a list of legislation Pence signed into law as Indiana governor, demonstrating his extreme views on reproductive rights and incarceration.

"On abortion, he signed a law as Indiana governor banning abortions because of genetic anomalies, abortions that were unfortunate anomalies," Reid said. "And he also signed a law mandating, and this is weird, women who have a miscarriage or an abortion had to have a burial for the fetus and must cremate after a miscarriage or abortion... On prison, he reinstated a ten-year mandatory minimum drug sentencing."

She then pointed out that Pence cut in half Planned Parenthood funding in the midst of an HIV outbreak, which resulted in the closure of some regional clinics in the state.