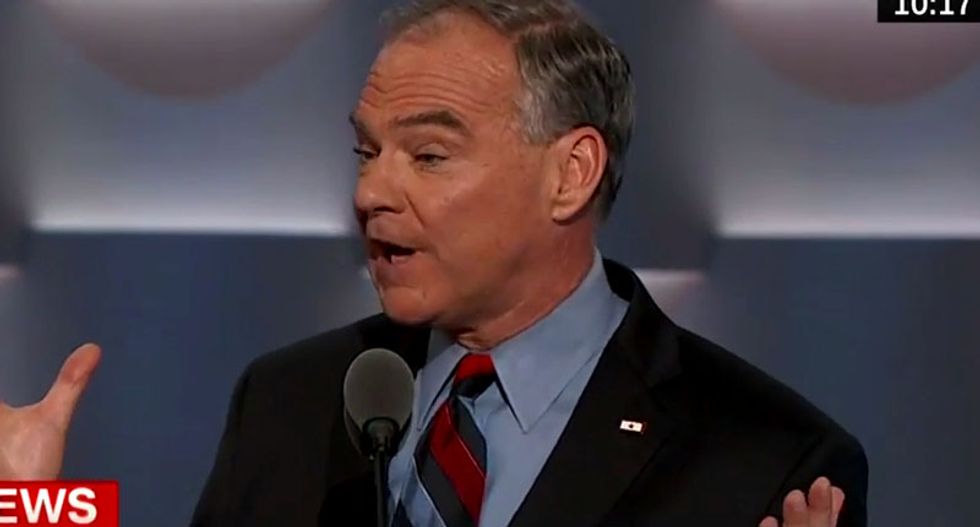 Tim Kaine was shamed by  the North Carolina Republican party for promoting the interests of a foreign government last night, after the GOP misidentified a pin on the VP-candidate's lapel. [He] wears a Honduras flag pin on his jacket but no American flag,” the NCGOP wrote. "Shameful.”

Kaine sported a flag pin on his lapel with a single blue star on a white background with red stripes. Someone at the NC Republican party, knowing that Kaine had served a year teaching teenagers carpentry and welding skills as part of a Jesuit mission in Honduras, made the leap that Kaine would be unsophisticated enough to wear the Honduran flag while addressing the DNC and the nation.

More research would have revealed that his son, Nathaniel Kaine, is a lieutenant in the United States Marine Corps, and the blue star pin is a recognized symbol for the "Blue Star Families" -- those with loved ones who are deployed abroad.

Ben Amey, who reports for WNYT, tweeted at the North Carolina GOP that it had made a mistake. In its followup tweet, the mistake was acknowledged.

The original tweet was taken down, but no apology was forthcoming to Senator Kaine, who had had his patriotism impugned, and his family's sacrifice mocked. It is difficult to believe that the Republican party of North Carolina, which believes that a strong military is essential, would not recognize the universal symbol for families whose family members are deployed in service.

When Amey tweeted his correction to the NCGOP, word spread across Twitter, and @NCGOP began to reap the wrath of the internet for its ill-advised tweet.

Robert Rikard echoed the sentiments of many when he wrote, "what a hateful, misinformed tweet." Nick Guillory offered a double entendre in which it wasn't clear if he was offering the NCGOP a temporary solution to the problem of its bad Kaine tweet, or a more permanent solution: "Dumb Dumbs. Correct all your mistakes by going away."

Others suggested some internet wisdom. BullCityVa told @NCGOP to "Check yourself before you wreck yourself," while Jim Cook offered the truism that "the time for correcting a mistake is before tweeting it. The GOP could use more fact-checkers and less tweeters."

And Sarah Dougherty was concerned that, not only had the GOP not fact-checked its tweet before hitting send, but, "The second worst part is they clearly have no idea what the Honduras flag looks like, nor access to the Google."

Byron White, MD pointed out the obvious irony in the level of mistake made by the NCGOP when it called Tim Kaine "shameful" for wearing the pin flag of another country: "One might even call that mistake 'shameful."

And more than one person called out the other obvious omission by the NCGOP. Steve R. Pufnstuf wrote: "At least they apologized," while Nick Douglas asked, "Wanna apologize and express some shame?"

Of course, tim h expressed the question foremost on many Democrats' minds after the patriotic trolling by the NCGOP: "what color is @NCGOP's Twitter service pin? Thanks for risking so much on social media, fellas @timkaine."

All of which led the NCGOP with plenty of this on its face courtesy of AMK:

And its one service vehicle out of commission after Radical Totality blew it up: