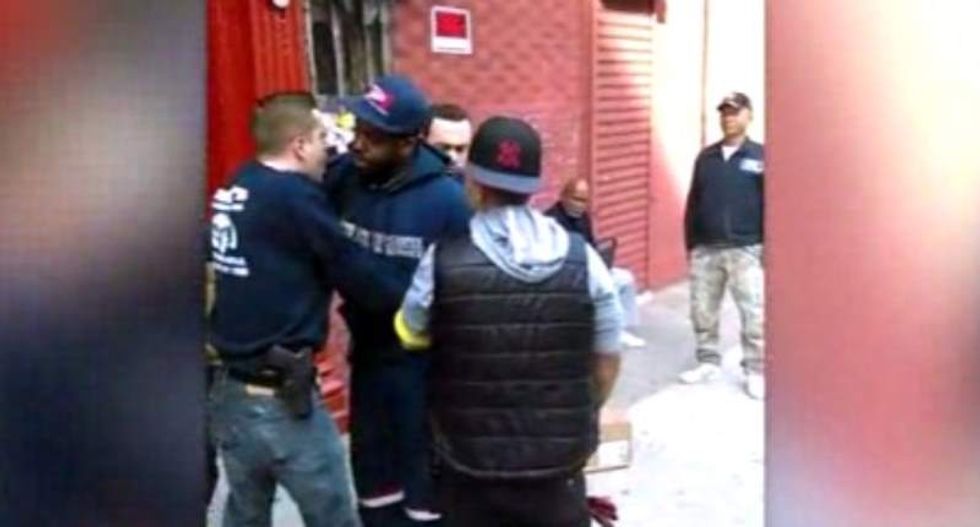 Gawker has posted an audio recording provided to them by an NYPD officer that seems to be an exchange in which the officer is being pressured to profile black men.

The recording was made in August 2012 during a performance evaluation of New York transit officer Michael Birch. He was expecting a routine evaluation, but instead he told Gawker, “the conversation just turned completely weird to me. Because he’s basically telling me it’s OK to racially profile.”

In the recording, his supervising captain can be heard criticizing him for only stopping two black men out of 54 people.

“Two male blacks,” the man's voice can be heard saying. “So you’re telling me you only saw two male blacks jump the turnstile?”

Birch is currently suing the department, claiming he has been retaliated against for being a whistleblower on an illegal quota system. While his original case was dismissed, he's filed an appeal with a higher court, Gawker reports. The New York Daily News reported on the tape but didn't publish it at the time. The Daily News says the supervisor in the tape is NYPD Capt. Constantin Tsachas.

Birch is not the only officer to accuse the department of racism or of having a quota system. A black highway officer told the Daily News that "racism is routine." In 2014, Reuters reported that black NYPD officers feel threatened by their colleagues when they are off-duty and not in uniform.

An excerpt from the recording, posted by Gawker, seems to show the captain interrogating Birch as to why he didn't target black men. The supervisor makes him admit that "mostly male blacks and Hispanics" between 15 and 19 years of age commit most of the crime in the city -- though that would be a warped point of view if the group is in fact being targeted more than others by law enforcement.

Commanding Officer: Who commits the crimes in the city?

Birch: Who commits the crimes? Well, it’s mostly teenagers, anywhere between the ages of 15 and 19, mostly male blacks and Hispanics.

OK. Who are you stopping?

Everybody. I stop everybody.

Fifty-four TABs up to 8/20. Twenty-five of those are female. Half.

Like I said, I stop everybody. I’m not targeting anybody.

You just told me who the bad guys are.

Yeah, I know that. But there’s also other people who are committing violations as well. I’m not saying that there’s not violations being made.

The male blacks, that you told me commit the crimes—

Plenty of people that I write summonses to are male blacks and male Hispanics.

8/20. From January 1st to August 20th. Fifty-four TABs: two male blacks, seven Hispanics, seven other, ten white, three Asian. So where are you targeting the perps that you just told me?

Like I said, if I don’t see a perp jumping over the turnstile, what am I supposed to do to him?

These people are not going to pop.

How do I know that? A female Hispanic that I stopped in Sheepshead Bay did pop, actually, for a warrant, and I arrested her. Female Hispanic. The Hispanics that we’re supposed to be going after. That are committing the crimes. The people that I—

Did you think that she was going to pop?

Did I think she was going to pop? I didn’t put no thought into it. If you come up for a collar, I’m taking you in.

Here’s what I see. You just described to me who’s committing the crimes. You’re fully aware of it. But you’re not targeting those people.

I am. I’m targeting everybody.

Whoever is out there. If I—

So you only saw two male blacks jump the turnstile?

That is what you have. That is not disputed here.

I’m saying, we’re also talking Hispanics as well. I stopped a lot of Hispanics, too.

Seven male Hispanics. But more than half are female.

And like I said, everybody’s committing violations in front of me.

Popping, according to Gawker, is when a warrant pops up and leads to an arrest, and TAB is police jargon for a court summons resulting from a transit violation.

This story has been updated to reflect the correct definition of the term "popping."

Listen to the recording, as posted by Gawker, here: