Obama and Trudeau's NAFTA bromance: Inside the strange world of political fanfiction 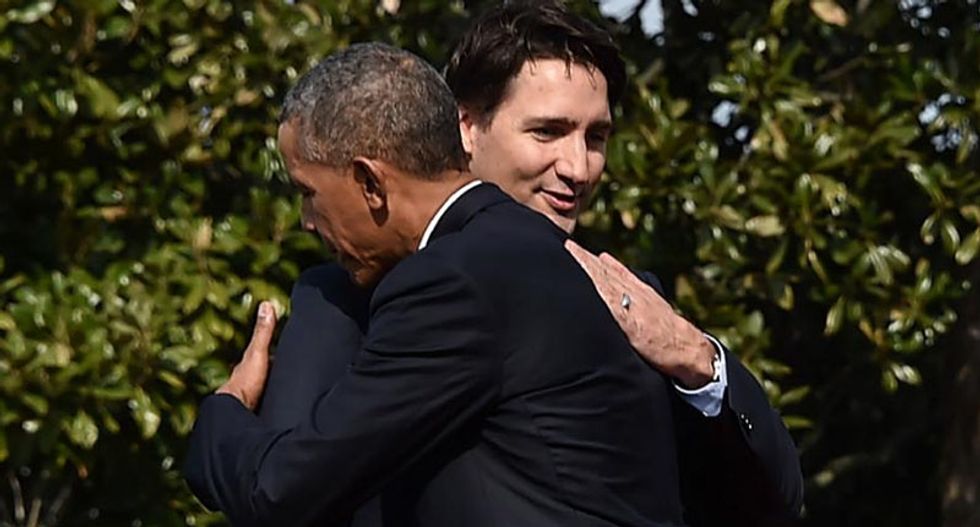 Fanfiction is derivative writing based on other writers' characters. In some genres of fanfic, characters are imagined to have ships with one another or "slash" ships, relationships between characters of the same gender. Perhaps the most "famous" slash fanfiction is that between Captain Kirk and First Officer Spock from Star Trek. When fanfiction meets Rule 34, a world in which death-to-gays Phillipine president Sebastian Duterte has sex with his male political rivals becomes de rigeur

Sometimes, the story that emerges is the kind of drunken mash-up that emerges when you mix your genres as if they were Mad Dog and Courvoisier: in this case, characters from Ian Fleming's imaginary world -- Le Chiffre, James Bond -- with real historical characters such as Nixon and various members of his inner circle -- Kissinger, Bob Haldeman, FBI Director J. Edgar Hoover. Not surprisingly, the quality of the writing is execrable, although winning literary prizes is not the point. (And it begs the question: why is so much fanfic based on bad writing to start with? The Twilight novels were awful; the fanfic based on them -- the Fifty Shades series -- will be what book-burning librarians are forced to read in the Dan Brown wing of hell.)

When Kissinger and Nixon have sex, he writes, "Eagerly, they undressed in the dark, kissing passionately in the process. It had been far too long since they had a moment like this, and Kissinger was making the most of it. Nixon gasped as the other planted hard kisses to his face and neck. He clung onto the younger man as if he were a buoy in the midst of a rocky sea, savouring his caresses like brief gasps of oxygen as he felt himself being pulled under." This is hardly the stuff of Penthouse Letters. More revelatory of the nature of the relationship, perhaps, is an earlier detail when Nixon falls asleep and Kissinger covers him with a blanket, planting a "small kiss on his forehead."

The author provides an explanation prior to this particular story, which also features rough footnotes that document Nixon's ability to play poker (thus explaining why Nixon would have played poker against Le Chiffre), in which he(?) insists that the situation depicted is "fictional" and "no disrespect" toward the historical personages is intended. This may be a standard way of covering the writer and the site from charges of libel; satire is protected speech as long as it is obviously satire and no truth claims are asserted.

So, is there a point writing stories about politicians? Vice attempted to understand the world of Barack Obama fanfiction and came to the conclusion that that specific iteration was young people attempting to incorporate their new hero, Obama, into their fantasy worlds of Star Wars or Harry Potter. In those worlds, Obama and Biden are heroes not hampered by a recalcitrant Congress. Evil overlords McConnell, Ryan, or Boehner can be zapped with a stun gun or thrown across a room with superhuman strength.

Garance Franke-Ruta argued in an article for The Atlantic that fanfiction is not all that different from what journalists already do when they write "obviously manufactured narratives in which they put a gloss on the real." In that world, journalists can invent a narrative in which Michelle Obama throws shade at John Boehner at a dinner, thus creating a need for journalists to invent/supplement/search for evidence (after the fact) that some type of adversarial relationship between the First Lady and the then-Speaker of the House existed.

Look at the stories that have emerged in the British press since the disastrous vote by British voters to leave the EU. The Caesar-Brutus relationship of Boris Johnson and Michael Gove has spurred British journalists to outdo one another in drawing parallels between Gove's "betrayal" of Johnson, which may or may not have led to Johnson's whimpering, craven withdrawal from British politics after breaking the country, and MacBeth's murder of Duncan or Brutus leading the conspiracy against Julius Caesar. But how much of the various Shakespearean plotlines are what really happened, and how many are the, in effect, political fanfiction of journalists watching with a combination of schadenfreude and schaulust (that can't-look-away-horror one feels at car crashes)?

In a world in which a violent homophobe has been elected president of the Phillipines, imagining him now as enslaved to a gay lover is at once a way of humanizing him, although it's more likely that the intent is to link Duterte to the behavior he claims to abhor. In a world in which Henry Kissinger and his machinations resulted in the deaths of real human beings, imagining a world in which he is the tender caretaker for a Richard Nixon anxious for Kissinger's approval is a way for the writer to make the two historical actors less powerful.

Molly Ivins once said that satire was the traditional provenance of the less powerful against those with power. In that respect, many of the political forms of fanfiction can be read as an imaginary where political power is nullified in the personal relationships of powerful people. If a powerful man's sexual proclivities, desires, or kinks makes him vulnerable to being seduced by anyone -- from the leader of another country like Vladmir Putin -- to the politically weak -- someone from the "servant class," then perhaps fanfiction is intended as an act of political resistance.

But there's one North American pol whose fanfiction sizzles. Justin Trudeau, he with the impressive core strength, has inspired a wild range of fanfiction where sex is described in the kind of details that are definitely not safe for work.

He had such white teeth, white as any northern snowfall. They glinted as he smiled. He stood up – and he was just the picture of magnificence. Then, with long fingers, he ripped open his white shirt. Buttons flew everywhere, one hitting you squarely on the forehead, but you did not mind. Justin Trudeau was beautiful, as muscular and manly as any Albertan lumberjack at the prime of his life.

You didn’t let up on the grip of your thighs, so Justin just pushed the front of his pants down. You moaned, this time not with lust but with sadness – sadness that you would not bear witness to the magnificent prime ministerial buttocks this time – but there was always the future.

But the shared fantasy of a surprisingly large selection of stories involves Trudeau with Barack Obama. In Squidith's world, the encounter between the two begins in the Oval Office:

Justin drifted the back of his hand down the President’s surprisingly firm chest, lowering his gaze to the other man’s body. He studied the lanky frame as he deftly undid the button on his own suit jacket. Then, he dropped to his knees. The plush floor absorbed the impact, and so easily, painlessly, he was now looking directly at the belt buckle of one of the powerful people in the world.

Whether the intent of political fanfiction is to render the most powerful people in the world pathetic, or whether it's to make the world's most unapproachable people into one's personal sex toy, sex with politicians is a powerful stimulus to the imagination. For those who dream of humping Trump, or who long to be Trudeau's true love, there's a world out there waiting where those dreams can come true.