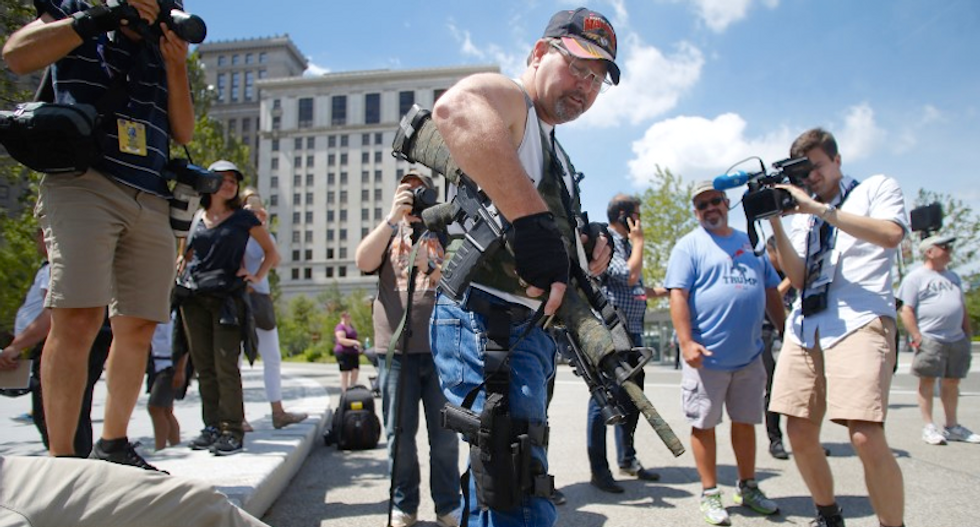 Steve Thacker carrying a rifle and a handgun is surrounded by news media in a public square in Cleveland. (REUTERS/Jim Urquhart)

Even gun rights advocates are questioning whether people should be allowed to carry rifles and handguns during protests at this week's Republican National Convention in Cleveland in the wake of the shootings of six police officers in Baton Rouge.

Backers as well as opponents of presumptive Republican presidential nominee Donald Trump have expressed concerns about the prospect of weapons being carried in open sight around the convention site.

Ohio is among the states that allow licensed gun owners to carry their weapons in public, and gun rights activists, particularly in Texas, have taken to expressing that right often in large-scale events.

Bill Morris, a 50-year-old police officer and Trump supporter from Alliance, Ohio, said he normally supports the open carry law but thinks it would be unwise to flaunt weapons in a year in which violence has broken out at campaign rallies.

"As a police officer I am very much in favor of the Second Amendment and the right to bear arms, but in a situation like this I don't see what good it does to open carry," Morris said near the convention hall, referring to the U.S. constitutional amendment that protects the right to keep and bear arms.

"You don't go walking around Washington, D.C., with a rifle, and I don't see why you should do it here."

Across town at a rally convened by liberals opposed to Trump, Tijuana Morris, a 61-year-old retired police officer from Detroit, sounded a similar note.

"I have a right to carry, and I don't have my weapon here today because we don't need any more violence," she said. "There is so much anger there and all you need is one person pulls their gun and makes a mistake."

On Sunday, a lone gun rights activist bearing arms showed up at a demonstration in Cleveland's Public Square. He admitted he had not expected to be alone the day before the start of the convention.

"This is a statement. I'm not going to be wandering around like this except in situations like this," said Steve Thacker, a 57-year-old former U.S. Marine who had an AR-15-style rifle slung over his shoulder, an assortment of ammunition magazines in a vest and a .45 caliber handgun strapped to his thigh.

He appeared shortly after a gunman killed three police officers and wounded three others in Baton Rouge, where police earlier this month shot dead a black man while responding to a report that he had threatened someone with a gun.

That shooting, coupled with the fatal police shooting of another black man in Minnesota a day later, triggered protests in U.S. cities over police conduct. Five Dallas police officers were killed by a black gunman that same week.

"The police are putting their lives on the line every day to protect the people," Thacker said. "When somebody targets officers like this it is the greatest show of cowardice I've ever seen. So, drop the hammer on them."

In the so-called event zone at the Republican convention, a 1.7-square-mile (4.4-square-km) area, authorities have banned items such as tennis balls, steel-pointed umbrellas and wood posts, but firearms are permitted under state law.

In a smaller "hard zone" surrounding the convention hall, which is temporarily under federal jurisdiction, guns are banned, meaning delegates cannot be armed on the convention floor.

The head of Cleveland's police union, however, on Sunday urged Ohio Governor John Kasich to suspend laws allowing the open display of firearms during the convention. Kasich, who had challenged Trump for the Republican nomination, said he lacked the legal authority to take such a step.

Trump, a billionaire real estate mogul from New York, has courted controversy with his calls to build a wall along the U.S.-Mexico border and restrict immigration by Muslims, steps he describes as necessary to protect Americans' security.

Shane Chodok, a 43-year-old maintenance worker at Cleveland State University and Trump supporter, said he supported open carry activists, though he was not carrying a weapon on Sunday.

"You have to have citizens ready to arm themselves to protect others. If you don't have open carry, what do you have? Mass murders like the ones in Orlando," Chodok said, referring to last month's massacre in a gay night club. "That (open carry) to the criminals sends a signal, and when they see it they are going somewhere else."