Protesters at Republican National Convention are 'extremely disappointed with turnout' 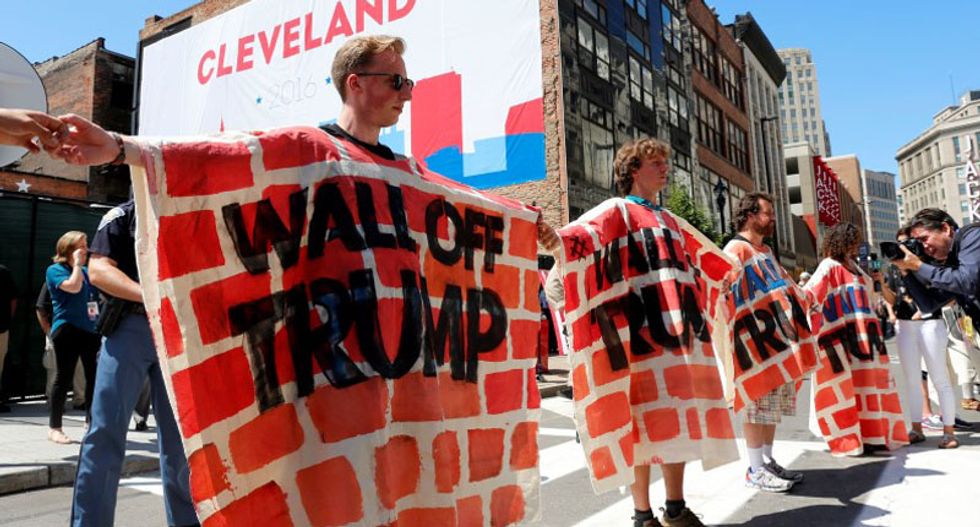 Protesters hold a banner reading "Wall Off Trump" outside an entrance to the arena hosting the Republican National Convention in Cleveland, Ohio, U.S. July 19, 2016. REUTERS/Lucas Jackson

Kirtland Park, on the shores of Lake Erie near downtown Cleveland, was designated as a place where hundreds of protesters could camp during the Republican National Convention. It is less than a quarter full.

One measure of the shortfall: With about 10 transportable toilets on hand Tuesday night and about 15 tents, the city was providing one plastic commode for every two campers.

U.S. political conventions typically are protest magnets, and the Republican National Convention that nominated Donald Trump as its presidential candidate after a bitter primary campaign had been seen as a major draw.

But three days in, the crowds were far smaller than expected.

Activists said deadly attacks on police in Baton Rouge, Louisiana, and Dallas had scared off some would-be protesters. Others saw the presence of "open carry" gun-rights advocates as a threat to their safety. Cleveland's heavy police presence discouraged others, protest leaders said.

"I'm extremely disappointed with turnout," said Lee Garnett, a 39-year-old tech worker who came from San Francisco to protest Trump's nomination. As he stood in Kirtland Park on Tuesday night, about two dozen activists listened to a man strum a guitar and sing.

The American Civil Liberties Union had won a court battle to reduce the size of the security area around the convention hall, arguing that people needed more space to exercise their free speech rights. But the designated 1.7-square-mile (440-hectare) "event zone" easily accommodated the few hundred protesters on hand at any given time. At rallies, police officers appeared swiftly and often outnumbered the protesters.

On Wednesday, police arrested 18 people - the biggest number of the convention so far - after they scuffled with police while trying to set fire to an American flag near the convention entrance.

Cleveland has put 500 police officers on the streets, backed by about 3,000 reinforcements from as far away as California and Texas. Hundreds of cops on bicycles, with others on foot and horseback, have directed and controlled crowds.

"It has a chilling effect on the exercise of free speech, which is so critical in a democratic society," said Terry Gilbert, a veteran Cleveland civil rights lawyer. "That's dangerous. I think that could change the whole dynamic of protest."

Cleveland police say the events have gone smoothly so far, with little violence and only 23 convention-related arrests through Wednesday.

Cleveland activist Art McCoy, founder of civil rights group Black Man's Army, which often protests against police use of force, said his group is not marching.

"We've decided to be still and observe," McCoy said, adding that he doubted convention protests would change relations between minorities and local police. "The convention is just a distraction."

Local activist Rachelle Smith said the Dallas shooting, in which five people were killed, influenced her choice to act as a legal observer and adviser rather than leading protests. "I expected numbers to be bigger – whether from people coming in from out of town or people from Cleveland getting involved," she said.

Ann Wright, 70, a member of the antiwar group Code Pink who traveled from Honolulu, said the same fear that caused some to stay home prompted her to travel to Cleveland.

"People who have privilege - I'm a white woman, I'm a retired lieutenant colonel - have to do this because we can," said Wright, a former U.S. Army officer and former U.S. diplomat.

Protest organizers were not giving up. On Wednesday, a group of immigrant-rights activists donned ponchos with a brick pattern and stood shoulder to shoulder in what they called a human wall. Trump has promised to build a wall on the U.S.-Mexico border.

"It's a beautiful sight," Ivan Vargas, a 28-year-old business consultant from Atlanta, said as the march kicked off. "These are people who are ready to put their bodies on the line."

At the end of the event, piles of unworn ponchos remained on the ground.