Protesters confront cops outside RNC: 'Who wants to talk through a line of guns?' 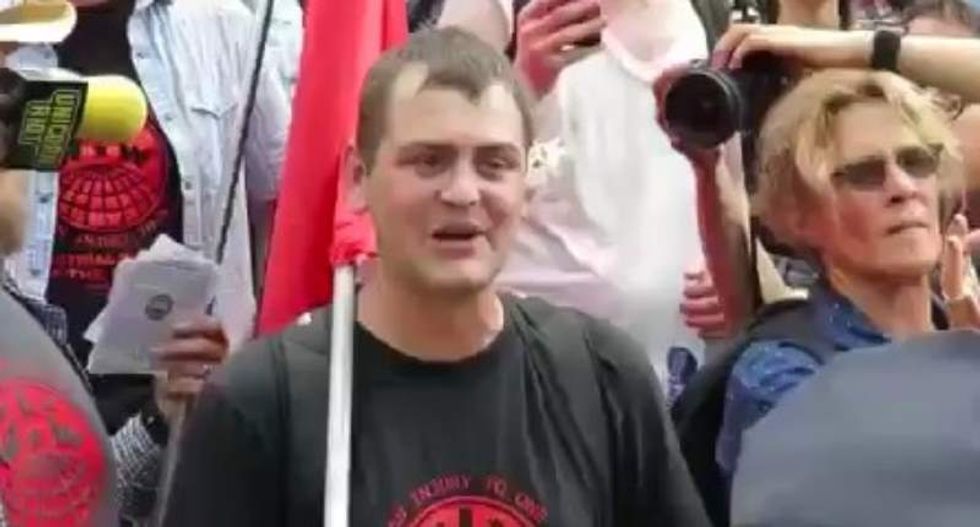 A man identifying himself as Pat Mahoney protests outside the Republican National Convention on July 21, 2016. (YouTube)

As demonstrations continued outside the Republican National Convention in Cleveland on Thursday, a member of what was described as an anarchist group was seen questioning police as they placed themselves between his group and other people rallying in the city's Public Square.

"I don't like this. Do you like this?" said the protester, who identified himself as Pat Mahoney. "We want to talk, but they're not letting us talk."

The footage, captured by The Raw Story's David Edwards, then shows an officer telling Mahoney, "Go ahead, talk."

"Who wants to talk to each other through a line of guns?" Mahoney asks.

Shortly after his back-and-forth with the officer, Mahoney's group is interrupted by an unidentified man waving an American flag and yelling "USA! USA!" before adding, "F*ck these motherf*ckers."

Mahoney is seen getting frustrated again when more officers walk in front of him, and sarcastically starts singing the Ringling Bros. circus theme song.

"We're very disappointed," says one of his fellow group members. "For the past few days, we've been able to come out here, talk to lots of people of different ideologies, have good conversations."