Republicans grapple with identity crisis after handing nomination to Trump: 'What happens next?' 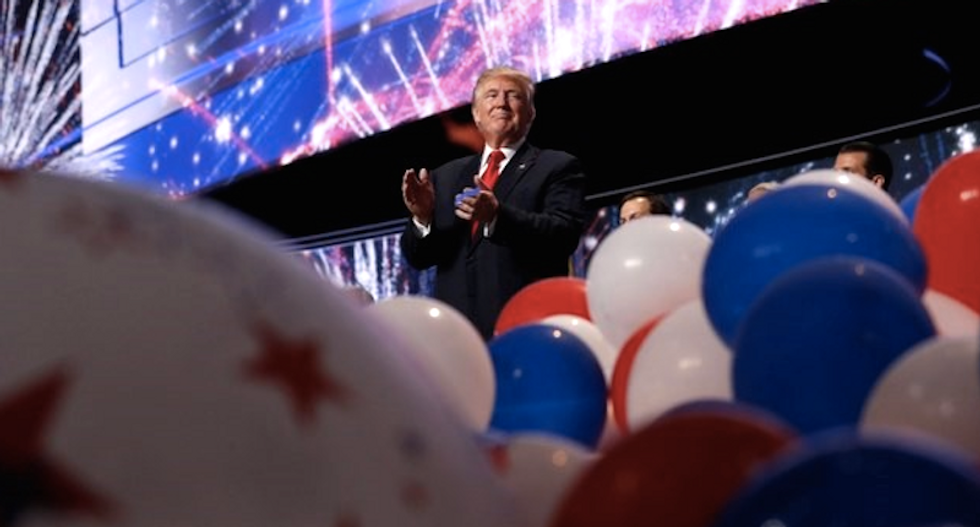 On the floor and corridors of the basketball arena hosting the Republican National Convention, in restaurants and bars, hotel lobbies and conference rooms across Cleveland, the talk was of the rise of Donald Trump, whose unlikely presidential candidacy has caused seismic fractures in the Republican Party.

While the venues changed, the question didn't: Where do we go from here?

This was the week that Trump was officially nominated as the Republicans' 2016 presidential candidate and was effectively given control of a party whose leaders have criticized him for his incendiary rhetoric, personal attacks on fellow Republicans, and tendency to stray from decades-old party orthodoxy.

He packed the convention hall with his grassroots army of supporters, who seemed almost completely disinterested in his policy positions, even though they could reshape the party for years to come on core issues like trade, immigration and foreign policy.

Those who were interested - party veterans, lawmakers, donors and lobbyists - found little clarity in any of the speeches delivered from the convention stage or in conversations with members of the Trump campaign.

Are we still a party that embraces free trade and free markets, they asked. Are we still committed to ending abortion rights? Do we want to create a path to legal status for undocumented immigrants or ship all of them out of the country?

Paul Ryan, speaker of the U.S. House of Representatives and the most powerful elected Republican, acknowledged that Trump has transformed his party. But he hedged on whether he believes Trump's impact will be lasting or simply a temporary phenomenon that will dissipate if he loses on Nov. 8.

“I don’t know the answer to that question. I really have no idea,” Ryan said at an event in Cleveland. Trump had changed the party, he said, but “how specifically and in what direction, I don’t know.”

Even after two days of speeches, Utah delegate Matt Throckmorton was still trying to figure out what a Trump presidency would mean for the Republican Party.

"What happens next?” asked Throckmorton.

In many way the uncertainty about Trump reflects the conflict within the Republican electorate. The party has struggled to find consensus on a number of key issues, according to Reuters/Ipsos polling during the 2016 campaign season.

For example, when asked in March about international trade, the same number of Republicans said it “creates jobs” as said it “causes job losses.”

Trump had his biggest stage on Thursday night, when he officially accepted the party's nomination, to spell out his vision of where he would take the Republican Party if he won the presidency.

But his speech, rich in rhetoric, offered scant detail beyond sweeping promises to put "America first."

“If this Trump speech - and this GOP platform - defines what a Republican is today, then it's hard to say I'm one. Hard for a lot of us,” tweeted Tony Fratto, a White House spokesman under President George W. Bush.

A week earlier, Republican activists were celebrating the adoption of a deeply conservative political platform that condemned gay marriage and opposed abortion with no exceptions, among other things.

Trump’s lineup of speakers at the convention this week barely referenced it.

"It's a little bit frightening," said Chris Herrod, another Utah delegate, explaining that the platform was one of the main ways delegates could help shape party policy. "And he seems to have an attitude of just completely disregarding it."

Away from the floor, some anti-Trump Republicans were quietly debating whether it would be better in the long-term interests of the party to lose the White House in November.

“This week we’re having some real anguished discussions,” said Vin Weber, a former congressman from Minnesota. “People are falling in line” with Trump, Weber said, “but what does this party believe?"

Take trade, for example. Republicans have long been the party of free trade, but Trump has said current trade deals have impoverished American workers and wants to renegotiate them or in some cases block them altogether, like President Barack Obama's signature Trans-Pacific Partnership.

Newt Gingrich, a former House speaker and a close Trump ally, worked to ease fears that a Trump administration would derail the U.S. economy by scrapping trade alliances.

“He has no interest in breaking up the world market,” Gingrich told a group of diplomats, adding that Trump was, in fact, committed to free trade with some added protections for American companies.

“Now how Trump will work this out, I have no idea,” Gingrich added.

Some attendees at the convention expressed the hope that Trump would align himself with many of their cherished conservative values but admitted they just didn't know what he would do once he was in office.

They would have found little solace in Gingrich's remarks to the diplomats.

But Trump's instincts are sometimes at odds with key elements of the party.

For example, he has been more accepting of gay rights and has see-sawed on abortion rights, first defending them and then saying he opposes abortion.

“Conservatives are prepared to believe Trump might be wrong 20, 25, maybe 30 percent of the time,” Richard Viguerie, a veteran Republican activist, told Reuters at an anti-abortion event. But, Trump's opponent, Democrat Hillary Clinton, “will be wrong 100 percent of the time.”

Asked if Trump supported the conservative social values espoused in the platform, he laughed. “Well, I don’t know,” he said. “We’ll have to wait and see.”

Some lawmakers at the convention dismissed some of Trump’s most provocative proposals, like his vow to deport an estimated 11 million undocumented immigrants, as unlikely to be implemented.

“Full-blown deportation is not going to sell politically and I don’t think a Republican Congress, or any Congress, would stand by and watch it happen,” Representative Tom Cole of Oklahoma told a group of convention attendees.

Some Republicans believe should Trump lose, the party will simply return to its more traditional conservative principles.

“The Republican Party is bigger than any one candidate, even a presidential candidate,” said Frank Luntz, a Republican pollster.

But Trump supporters said those Republicans were in denial and that Trump had permanently wrested control of the party away from the establishment elites.

“Where’s Mitt Romney, where are the Bushes?” said Mary Lou McCoy, who had traveled to Cleveland from Buffalo, New York, referring to the 2012 Republican nominee and the Bush political dynasty. “The people have spoken.”