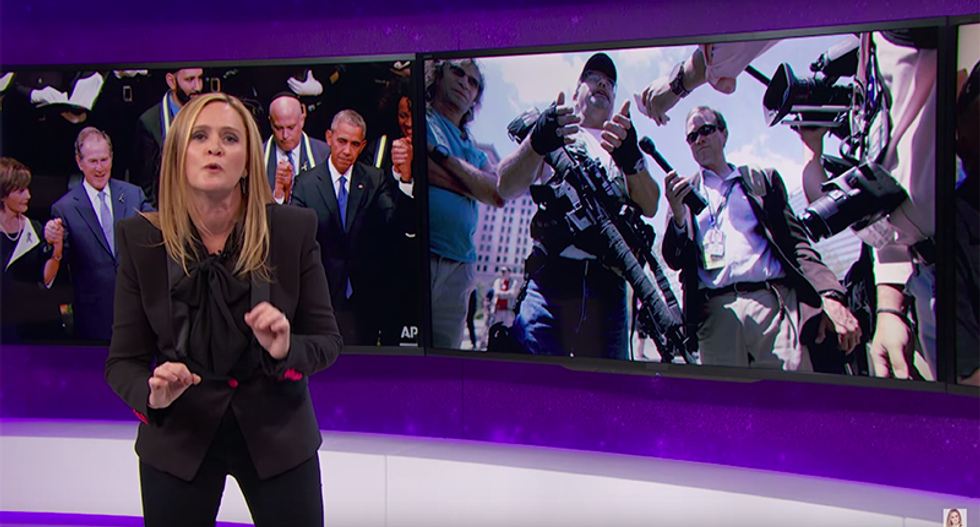 When Cleveland, Ohio, was bidding on the Republican National Convention to be held in their city two years ago, Samantha Bee described it as an easy listening concert hosted by Jeb Bush. Now it's the apocalypse as a "rough beast slouches towards Cleveland," Bee's voiceover said as footage of Donald Trump appeared.

The disappointing thing about the RNC is that it nearly took an act of God to get the city's police what they needed to be prepared.

"We're screwed," Steve Loomis with Cleveland's Police Patrolmen's Association told her. "I have forbidden my friends and family for going downtown during the convention. It's a very difficult spot for these police officers to be in. We're going to be stuck in the middle of two groups of very passionate people. Mr. Trump does bring a certain, additional spice to the convention."

After the deaths of Alton Sterling and Philando Castile and the shooting deaths of three police officers in Baton Rouge and five in Dallas, increased violence is the worst thing that could happen for everyone, including police, citizens, community organizers, honestly, anyone. Naturally, supporters of Trump heeded that call and decided to come to the GOP convention with their arsenal.

"Violence is bad for everyone. Well, almost everyone," Bee said, before showing a clip of Donald Trump on "60 Minutes" explaining how we needed toughness, strength and President Barack Obama and Hillary Clinton are weak and he demanded law and order. "The people providing law and order this week have one tinsey request: Can the amateurs please leave their f*cking guns at home?"

"Look, you Dollar Store Rambo, the Cleveland police have a hard enough job to do between calming belligerent bikers and resisting the urge to punch Code Pink in the face," Bee continued. "They're also sweating under 50 pounds of armor because madmen with long guns have been murdering cops just because they're cops. So, I'm sorry, sir, but they just can't with your Second Amendment foolishness. Not today! Listen to the cops that will save you when the sh*t goes down and you're running away in your pee-stained mom jeans, okay?"

When it comes to the men in blue lining the streets of Cleveland's RNC, however, Bee's funny take isn't too far off.

"The men and women of Cleveland's police department are going to do the absolute best that they can with the resources, training and equipment that they've been given. That being said, they haven't been given enough of any of that," Loomis continued.

Bee clarified that since the interview, the city did scramble to come up with the things needed for the officers trying to protect the city.

Loomis said that protesters try to do anything they can to antagonize the police. They bring water guns in filled with urine or bleach. But Bee has faith in the city to withstand the Trump-quake.

Watch the video below for more, including an excellent moment when Loomis tells Bee that she'd be a great undercover hooker: