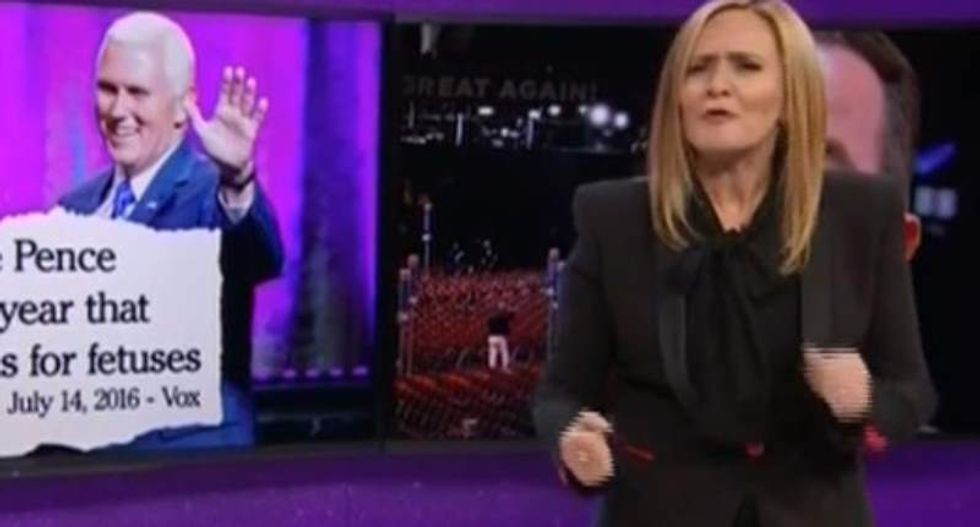 Samantha Bee ripped into both the Republican National Convention and presumptive vice-presidential nominee Mike Pence on Monday, saying that Indiana would be better off losing him as the state's governor with him entering the presidential race.

"Indiana voters hate Pence as much as Indiana Jones hates snakes," Bee said after showing footage of him getting booed during an appearance at a baseball game.

Pence got booed, she said, because of his record of supporting anti-LGBTQ and anti-reproductive health policies.

"It's 10:30 in Indianapolis, 9:30 in Gary and 1952 everywhere thanks to Pence," she cracked. "If you're a lady Hoosier, you may recognize him as the governor to inspected your productive organs every 30 days to make sure you weren't using them in a way that would make Jesus sad."

But while Clinton may have told some lies during her career, Bee said, none was as big as Trump calling the governor his "first choice" for running mate, saying that he made the pick after vacillating between "Republican Littlefinger" Newt Gingrich and Pence, who she described as "Roger Sterling during an asthma attack."

Bee also noted that she would be going to Cleveland on Tuesday for this week's Republican National Convention, but admitted to being surprised that Sarah Palin -- a vocal Trump supporter -- would not be attending.

"She's mad because Trump stole her word salad spinner," Bee said, adding, "But at least mega-star Scott Baio will be there -- making this the second time he's watched helplessly as someone jumps the shark."

Watch Bee's commentary, as posted by The Daily Beast, below.