Seth Meyers: DNC is a happy family -- and Trump is the ‘racist uncle’ nobody likes 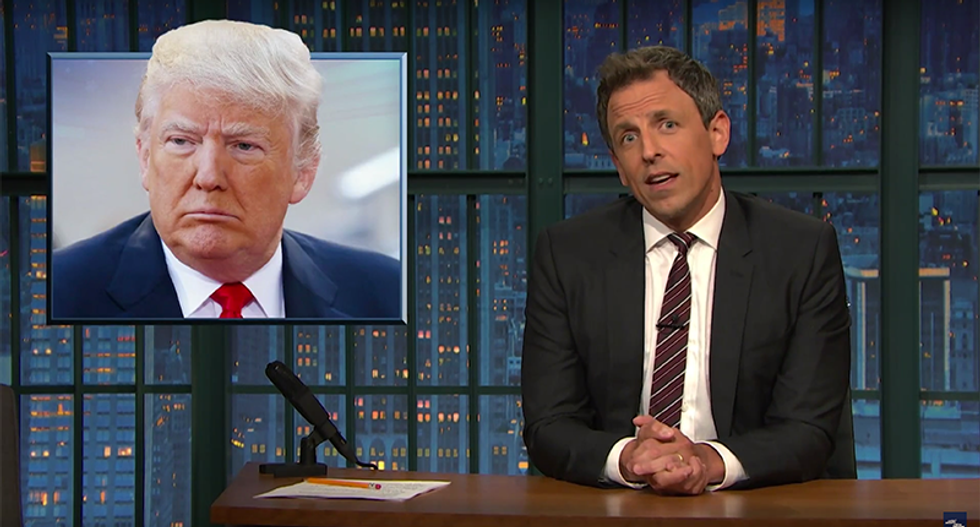 It was the final night of the Democratic National Convention and Seth Meyers explained that the Democratic Party was coming together more like a family at a family reunion than anything else.

You've got mom (Hillary Clinton). Then there's "the rich uncle you never thought would come," a.k.a Michael Bloomberg. "The step-dad who pulls a nickel out of your ear even though you're 27," which fits Joe Biden. "The cool cousin who everyone's bummed has to leave early," a.k.a Barack Obama. "And no matter how much you fight, the one thing everyone in the family can agree on is that no one likes your racist uncle," Meyers said flashing a photo of Donald Trump.

But it was former Mayor Michael Bloomberg that surprised people most with his billionaire on billionaire smackdown. Bloomberg came out swinging with some major Trump burns about the way Trump plans to run the country like a business. "God help us," he said. Also, "I'm a New Yorker, and I know a con when I see one!"

"Nothing is going to get under Trump's skin more than another billionaire questioning his wealth," Meyers said. "And Bloomberg is worth $47.5 billion where Trump is only worth $4.5 billion. Basically, Bloomberg has enough money to buy Donald Trump and still have money for another Donald Trump if the first one gets cranky."

Meyers said that Clinton's convention-closing nomination speech -- "the speech she's been practicing in the mirror for the past 40 years" -- went fine, pointing out that she even nailed her required one-joke-per-hour in mocking Donald Trump for speaking for "70-odd minutes, and I do mean odd."

"That must be such a relief for whoever wrote that joke for her," he argued. "Giving Hillary a joke is like giving a monkey a switchblade -- it rarely goes great."

However, just a week after allegations of plagiarism plagued the Republican convention, Meyers said Clinton's moment was "marred" by a theft of her own, before showing a clip of the former secretary of state saying, "Let's take a closer look" -- the same phrase he used to introduce his commentary.

"Next thing you know, she's gonna start giving her speeches from behind a desk," he quipped.