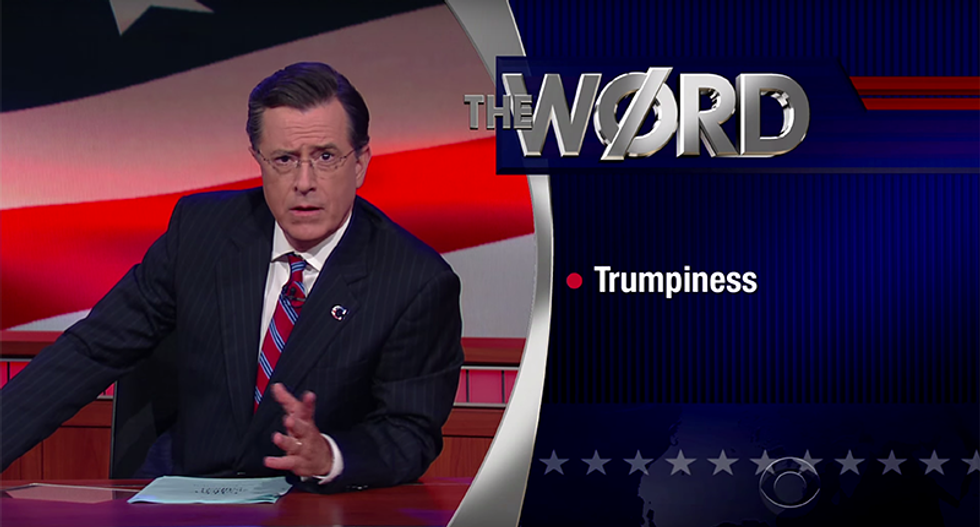 After being rolled out on a chariot dragged by shirtless Uncles Sam holding a Captain America shield, Colbert slipped into his old Republican character with the deep, stern voice and greeted the "nation" as he did on his old show. With a clap of his hands, a large American flag appeared behind him and his left eyebrow raised toward the God of the GOP.

"Nation, right now, Americans are angry, confused and lashing out randomly — and that's just the Republican nominee. A lot of people are wondering how America, God's girlfriend, ended up in a relationship with this guy," he said pointing to Donald Trump's photo.

Colbert assures us that this is merely the "brave new world of American Democracy" afoot.

"Which brings me to tonight's word," he said the familiar line.

"Just to remind you, 11 years ago, I invented a word: truthiness," he said, with "Trademark Viacom @2005, All Rights Reserved" splashed across the "Word" box.

A lot has happened since Republican Colbert was on air. Colbert said that jobs were shipped over to China, as "to make Trump hats" filled the "Word" box. "Right now, at least half of Americans feel their voices aren't being heard," Colbert said as "especially, Mike Pence" appeared in the box.

"You see, truthiness is believing something that feels true, even if it isn't supported by fact." He explained that Republican Colbert and GOP nominee Donald Trump have a lot in common. Both men are "over-the-top TV personalities who decided to run for president," only it was really just a joke and Trump has clearly surpassed Colbert.

But, "if [Trump] doesn't ever have to mean what he says, that means he can say anything," Colbert clarified. "Here's the deal: Truthiness was from the gut, but Trumpiness clearly comes from much further down the gastrointestinal tract." The byproduct is remarkably similar, too.

"Truthiness has to feel true, but Trumpiness doesn't even have to do that," he explained. "In fact, many Trump supporters don't believe his wildest promises, and they don't care." Like the border wall for example. Everyone knows it will never happen. One supporter last week admitted, "I think if he strengthens the borders... it will be the same as building the wall...the wall can be built even without having to be built." Colbert explained that "if you can feel the wall," you don't actually have to "see the wall." It's like the "Emperor's New Border," in a way.

Trump supporters don't need their leader to say things that are true. "They need a leader to feel things that feel feels," Colbert claimed.

"And that is why I believe Donald Trump is a leader for our times: an emotional megaphone for voters full of rage at a government that achieves nothing, an economic system that leaves them behind, and politics that elects people unfit for the job. And if you don't share their feeling that you don't recognize your country anymore, trust me, if Trump wins, you will."

Brilliant. Watch the video below: