Stick a fork in him -- Roger Ailes steps down from Fox 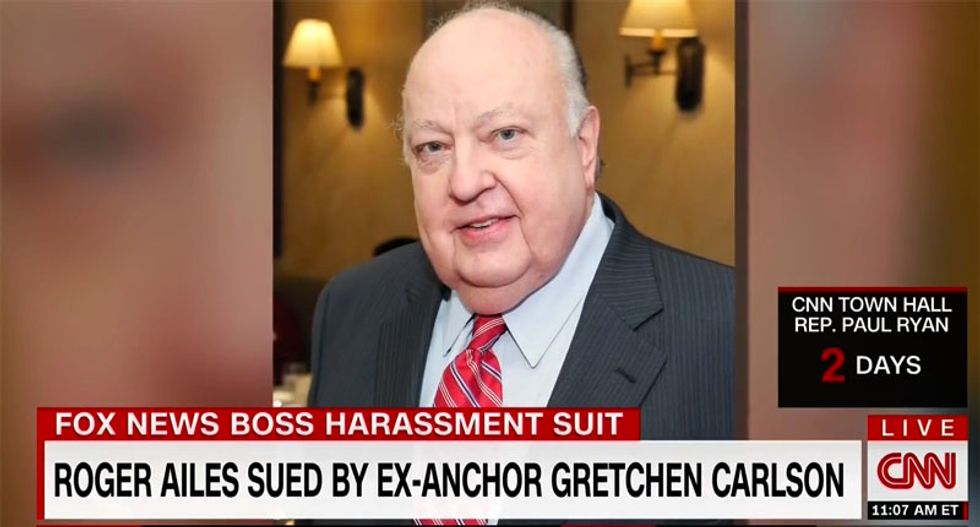 Time is officially up for Fox News CEO Roger Ailes.

The Drudge Report, via Gabriel Sherman, first reported that 21st Century Fox executive chairman Rupert Murdoch has officially asked Ailes to step down from his position as CEO of Fox News, although he will stay on as a "consultant" at parent company 21st Century Fox for another two years.

The trouble for Ailes began earlier this month when former Fox host Gretchen Carlson sued him for alleged sexual harassment. Things quickly spiraled out of control from there as several other women -- including, reportedly, star anchor Megyn Kelly -- came forward with stories of Ailes's sexual misconduct.

After Ailes's departure, Fox could face an unprecedented exodus of talent. Various reports have said that Bill O'Reilly, Sean Hannity, Greta Van Susteren and others could follow Ailes out the door.

Below, you can read the entire 21st Century Fox press release announcing Ailes's departure. As you might expect, given the sordid nature of it all, the press release makes no mention of why Ailes is stepping down.

Rupert Murdoch will assume the role of Chairman and acting CEO of Fox News Channel and Fox Business Network.

“Roger Ailes has made a remarkable contribution to our company and our country.  Roger shared my vision of a great and independent television organization and executed it brilliantly over 20 great years.

Fox News has given voice to those who were ignored by the traditional networks and has been one of the great commercial success stories of modern media.

It is always difficult to create a channel or a publication from the ground up and against seemingly entrenched monopolies.  To lead a flourishing news channel, and to build Fox Business, Roger has defied the odds.

His grasp of policy and his ability to make profoundly important issues accessible to a broader audience stand in stark contrast to the self-serving elitism that characterizes far too much of the media.

I am personally committed to ensuring that Fox News remains a distinctive, powerful voice.  Our nation needs a robust Fox News to resonate from every corner of the country.

To ensure continuity of all that is best about Fox News and what it stands for, I will take over as Chairman and acting CEO, with the support of our existing management team under Bill Shine, Jay Wallace and Mark Kranz.”

“We join our father in recognizing Roger’s remarkable contributions to our company.  Our talented Fox News and Fox Business colleagues, up and down the organization and on both sides of the camera, have built something that continues to redefine the cable news experience for millions of viewers. We are enormously proud of their accomplishments. For them, as well as for our colleagues across our entire organization, we continue our commitment to maintaining a work environment based on trust and respect.  We take seriously our responsibility to uphold these traditional, long-standing values of our company.”

"Within 2 weeks of filing a lawsuit against Roger Ailes, Gretchen Carlson's extraordinary courage has caused a seismic shift in the media world," the statement read. "We hope that all businesses now understand that women will no longer tolerate sexual harassment and reputable companies will no longer shield those who abuse women. We thank all the brave women who spoke out about this issue."