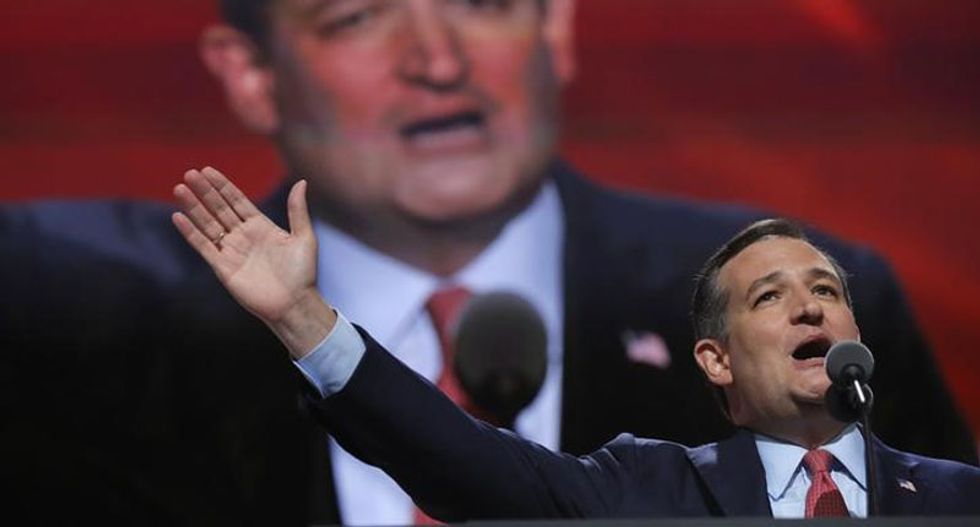 Ted Cruz was recounting to an audience how he had outlasted most of his 16 rivals for the Republican presidential nomination when a plane carrying the man who had won it all, Donald Trump, flew overhead, interrupting him mid-speech.

"All right, that was pretty well-orchestrated," said Cruz, a Republican U.S. senator from Texas who waged a bitter campaign against Trump.

Hours later Cruz would take his revenge, refusing to endorse Trump and urging Republicans to vote their conscience during a prime-time speech on the floor of the Republican National Convention in Cleveland. He left the podium to a chorus of boos, and his wife was escorted off the floor as the convention erupted in rancor.

Susan Hutchison, chair of the Washington state delegation, said she confronted Cruz after his speech and called him a "traitor to the party."

So much for party unity.

Over three days in Cleveland this week, Republican leaders sought to sell a story of unity. They repeatedly said the party was getting ever closer to rallying behind Trump, who is running on the slogan "Make America Great Again!" and whose candidacy has divided many and exposed deep discontent among Republicans with their leaders.

But in a few minutes on Wednesday night that show of unity was blown apart in spectacular fashion.

Cruz's non-committal speech infuriated Trump supporters among the thousands of delegates cramming the floor of the Quicken Loans Arena in Cleveland. But their angry jeers triggered recriminations from other delegates.

“They talk about unity and then they act like that. That is not going to get us to unify,” said Manette Merrill, a Cruz delegate from Washington state.

Trump will get the opportunity to rally the party when he formally accepts its nomination on Thursday night in a speech expected to be watched by millions of Americans, including undecided and independent voters.

One of Trump's key goals going into this week's convention was to unite the party after a roughly 18-month primary season that was marked by personal attacks on candidates, sometimes violent rallies, and deep disagreement over what it means to be a Republican.

In public and in private the Trump campaign tried to win over skeptics who feel the New York businessman and celebrity TV star does not represent the party's values. It took a harder stance against opponents, for example shutting down a desperate last-minute bid on the convention floor early in the week to stop his nomination.

"It's like a slow crawl," former Republican National Committee Chairman Michael Steele said of the unity drive as he made the rounds at the convention. "You're kind of doing it. You're kind of looking around to see if anyone else is doing it," he told Reuters.

But almost from the start there were blatant signs of party disunity.

Ohio Governor John Kasich, who lost to Trump in the nomination fight and disagrees with Trump on a host of issues, declined to attend the convention held in his own state.

Instead, he greeted his supporters at the Rock and Roll Hall of Fame close to the convention arena to the blaring tune of The Who's "Baba O'Riley" with lyrics like, "I don't need to fight to prove I'm right."

Trump campaign manager Paul Manafort told reporters that Kasich was "embarrassing his state" by refusing to get on the Trump train. His remarks were a reminder of the sort of insults that many Republicans had hoped would disappear after a brutal primary season that was characterized by Trump's often personal attacks on his opponents.

The pleas for unity were frequent in Cleveland, led by House of Representatives Speaker Paul Ryan, the top elected Republican, who has been slow in warming to Trump.

"What do you say that we unify this party at this crucial moment when unity is everything?" Ryan asked thousands of convention attendees on Tuesday night. It was the biggest applause line of his speech - delegates cheered, clapped and waved signs.

But U.S. Senator Mike Lee of Utah, one of the "never Trump" holdouts, is still not convinced.

“Federalism and separation of powers – if he focuses on that, he brings along a lot of conservatives like me who haven’t been sold yet," Lee told Reuters. "He needs to make that a distinct part of his message.”

Trump and his surrogates have offered scant policy details so far at the convention, nor have they been able to put to rest questions about whether they are capable of mounting a sophisticated presidential campaign to take on his Democratic rival Hillary Clinton.

The convention has been overshadowed, for example, by controversy surrounding his wife Melania's convention speech - which included lines uttered by first lady Michelle Obama at the Democratic convention in 2008 - and the campaign's initial reluctance to admit the plagiarism.

Some Republicans thought it was an unnecessary distraction at a time when the party should be focused on selling itself and its new leader to Americans.

Others said that if Trump was really serious about uniting the party he would reach out to his vanquished foes on the campaign trail, including Cruz and Kasich.

Ken Cope, a Texas delegate who had backed Cruz for president but will vote for Trump, said the New York businessman needs to "swallow his pride" and stress the contributions his 16 defeated rivals made to the primary process instead of belittling them.

"He's a prideful man and he’s proud of what he is but we’re in a general election campaign and it's going to take all of us pulling on the rope if we’re going to pull the ship to the final line," Cope said.

Still others said Trump needed to be more disciplined.

Trump supporter John Whitmer, a delegate from Wichita, Kansas, said Trump made a mistake by going on Fox News on Monday night to rail against Kasich as speakers were lauding his candidacy at the televised convention.

"You just stepped on your best act," Whitmer said. "I get that you want to talk about Kasich, but everybody needed to be watching what was going on there.”

After Wednesday night, the best hope for the Republican Party to come together may rest on Clinton, who was frequently vilified at the Cleveland convention this week. She will be formally nominated as the Democratic presidential nominee at her party's convention in Philadelphia next week.

When asked if the party was unified, former Speaker of the House of Representatives and close Trump adviser, Newt Gingrich, replied: “No, but we will be by the end of Philadelphia.”

"Trump will get us to 90 percent unity. She’ll get us the rest of the way.”

(Additional reporting by Steve Holland and Amy Tennery in Cleveland and Chris Kahn in New York, editing by Paul Thomasch and Ross Colvin)