The Economist can't figure out why millennials aren't buying diamonds 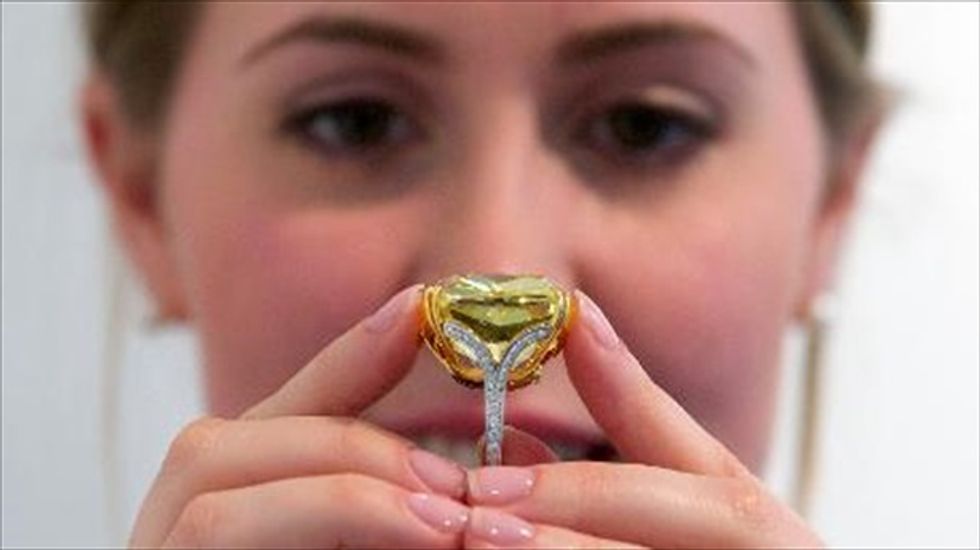 A Sotheby's employee poses for pictures with the 'Graff Vivid Yellow,' at 100.09 carats, one of the rarest yellow diamonds of its size, in London, on April 11, 2014 [AFP]

If a magazine proudly lables itself "The Economist," you would expect that publication to understand the economic burdens of today's youth. But when a tone deaf writer at the magazine tweets an article asking "Why aren't millennials buying diamonds" it pretty much sums up how oblivious some can be in matters they're supposed to be experts in.

The questionable tweet included a link to an article about how millennials just aren't purchasing the overpriced and overrated stones like the generations before them:

"Young consumers increasingly shun the taint of conflict and exploitation, and middlemen have been hit as banks balk at gemstones’ untraceability. Laboratory-made gem diamonds, grown using a technique called chemical vapour deposition, are emerging as rivals; these near-perfect crystals bear none of the messy ethical implications of the mined stones."

While I'm sure some millennials are concerned with the ethical issues involved in mining for diamonds, the main reason they steer clear of the gems is because, well, they're a dumb investment. It's that simple. Considering millennials are one of the first generations to be worse off than their parents, it's no surprise that splurging on an emerald-cut monstrosity isn't the smartest move.

Would you look at that! Turns out millennials aren't so irresponsible after all!

But don't take my word for it. Just take a look at the hilarious response by the very people The Economist inquired about:

It's impossible to explain why something as simple as a misguided tweet would irk so many people in 140 characters or less, so let me try to elaborate on why The Economist is completely out of touch.

Prioritizing the ownership of gemstones while simultaneously coping with the fact that tuition for public in-state universities has risen an astonishing 296% since 1995 is beyond stupid. That's not tuition for a fancy private school - we're talking about tuition for what's supposed to be the most affordable institutions in the country. That might be why student loan debt surpassed credit card debt several years ago and now amounts to a colossal $1.3 trillion.

Tuition has outpaced inflation by stunning numbers. In fact, the Star Tribune looked at the Bureau of Labor Statistics and reported back in 2014 that the inflation-adjusted cost of attendance in 2014 should've been just under $5,000. Instead, it was over $12,000.

When crippling student loan debt is coupled with severe underemployment and stagnant wages, something as nonsensical as jewelry isn't, and shouldn't be, on a millennial's radar. The unemployment rate for young people was a whopping 18 percent in 2010. From 2008 to 2013, wages fell for millennials and millennials only.

Before I get the obligatory comments about how we're all lazy assholes who mistakenly majored in nonsense, keep this in mind: we're the most educated generation with the largest percentage of people either with a degree or currently enrolled in college.

We're not all studying women's studies or Greek mythology either. There's been a trend of lawyers graduating from prestigious law schools, passing the bar, and not finding any work. Americans specializing in STEM jobs are getting replaced by cheaper foreign employees with H-1B visas. Then there's the constant outsourcing of jobs to countries like India and China.

All these economic issues are forcing my peers to hold off on everything from moving out of their parent's home to having children. This is not a sob story, but rather the real explanation for why we don't give a shit about how many carats of carbon we can embellish our fingers with.