Trevor Noah scorches Trump: 'How is one party's nominee for president praising a mass murderer?' 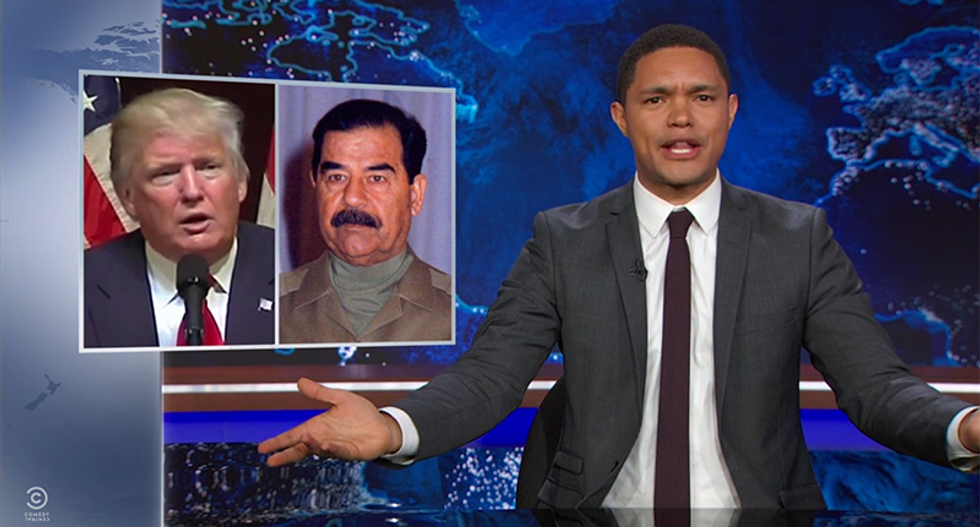 If anything shows Republican presidential candidate Donald Trump isn't ready to sit behind the desk in the Oval Office, it's that he can't even run a campaign properly.

Trevor Noah wondered on Wednesday night's episode of The Daily Show how it's possible that Trump failed to take advantage of Hillary Clinton's massive public relations nightmare over the email server controversy. Instead, he put the nail in his own coffin, Noah argued.

"In any normal race, this would be fatal for a campaign," Noah began. "So, last night in his own speech, all Donald Trump had to do was focus on Hillary. Focus, Donald."

Noah then showed a clip of Trump going off in one of this fits of off-script rambling.

Trump's statement was so unbelievable, Noah thought people were trying to pull a fast one over on him.

Noah also pointed out that it wasn't exactly that Saddam Hussein killed terrorists, as Trump alleges. It's that he killed everyone. "Yes, if you kill everyone, you're bound to kill some terrorists. Saddam was also really hard on dry cleaners and school teachers, are you going to praise him for that too? Like, who are you?!"

Finally, Noah asked, "How is one party's nominee for president praising a mass murderer?" He continued that he ultimately feels sorry for the GOP at this point. He imagined Republican House Speaker Paul Ryan driving home telling his wife that Donald Trump learned his lesson this time and won't be tweeting stupid things or saying random things that get him into trouble. Inevitably, he has to turn around.

But that wasn't Trump's only idiotic statement about Saddam Hussein. The candidate for president also blew off the murders as "a little gas."

"Is America really considering electing a man who talks about war crimes like he's on an episode of Drunk History?" Noah asked.

But this isn't the first time Trump has stood with evil or even fascist dictators. Noah ran a clip of all of the times Trump complimented everyone from Vladimir Putin to North Korea's Kim Jong Un, and Libyan dictator Muammar Gaddafi to fascist Italian dictator Mussolini.

Noah ultimately boiled down the election to a choice between Grandma Nixon or a traffic cone soaked in raw sewage.