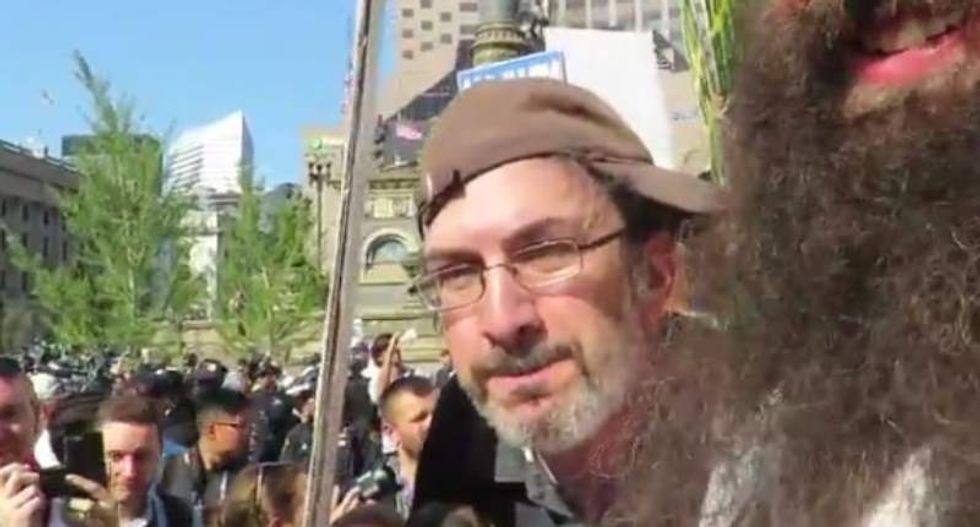 A group of counter-demonstrators led by famed comedy writer Robert Smigel injected some levity into the cacophony surrounding the Republican National Convention on Tuesday when they aped -- then mocked -- a Westboro Baptist Church (WBC) group in the Cleveland Public Square.

Smigel, creator of Triumph the Insult Comic Dog, led the group as they stood in front of the Westboro contingent carrying rainbow-colored signs reminiscent of the ones the WBC typically takes to their own demonstrations.

But instead of condemning gay people, the counter-protesters' signs bore slogans like "God hates morning people," "God hates bangs," "Kevins repent" -- with a picture of Kevin Spacey's face -- and a sign depicting Taylor Swift with "devil's horns" warning, "Bangs are the devil's children."

Smigel not only directed them through several chants, but took audience requests -- up to a point, since he turned down a woman's request that they chant, "God hates the military industrial complex."

"Too complicated," he said, with Triumph visible in one hand. "Sorry, these are protests for morons."

Instead, he led the group in a simpler chant -- "God hates bad wifi."

Watch the counter-demonstration, as posted online on Tuesday, below.