Trump: ‘I guess’ I wouldn’t vote for a former KKK grand wizard – depending on his opponent 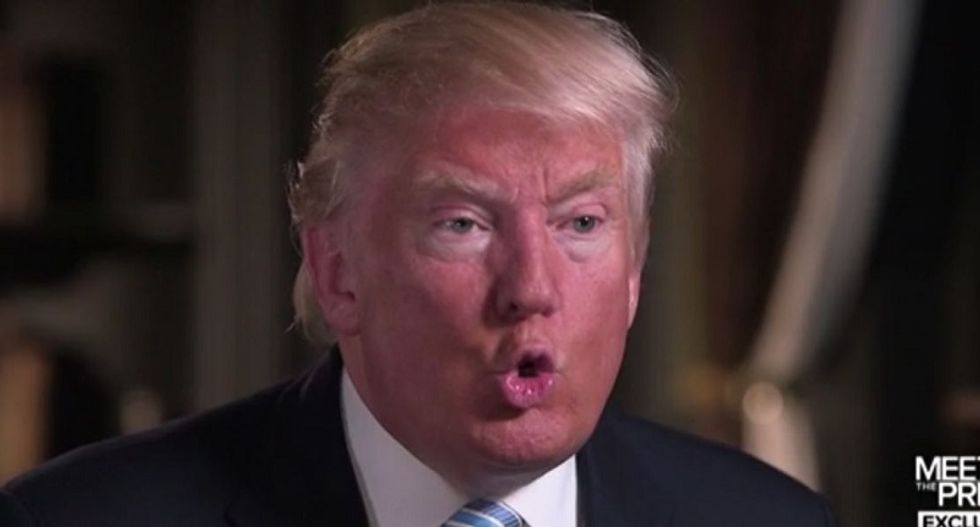 In an interview with MSNBC's Chuck Todd on Sunday morning, GOP candidate Donald Trump said he wasn't totally certain he'd support a Democratic opponent to white supremacist David Duke, who said he's been inspired by Trump to run for a Louisiana Senate seat.

Duke, who is a former Ku Klux Klan Grand Wizard, has said he is "overjoyed" by Trump's candidacy, according to CNN.

"The New York Times admitted that my platform became the GOP mainstream and propelled Republican control of Congress," he told the network. "I'm overjoyed to see Donald Trump and most Americans embrace most of the issues that I've championed for years. My slogan remains 'America First.'"

Trump has in the past disavowed Duke, who has long supported his campaign. But on Sunday, his rejection of one of the country's best-known racists seemed lukewarm.

"David Duke announced his Senate candidacy claiming your agenda for his own, or essentially saying glad that you spoke out," Todd told Trump. "Newt Gingrich said, every Republican should repudiate this guy no matter what he says."

Todd then pressed him, asking, "Would you support a Democrat over David Duke, if that was what was necessary to defeat him?"

Trump responded that it depends on the Democrat, but also said he would not support Duke.

"I guess, depending on who the Democrat, but the answer would be yes," Trump said. "Look, the answer is, as quick as you can say it -- rebuked. Is that OK? Rebuked."

Watch the full interview, on MSNBC's Meet the Press, here. Trump's comments about Duke come at the 15:50-minute mark: