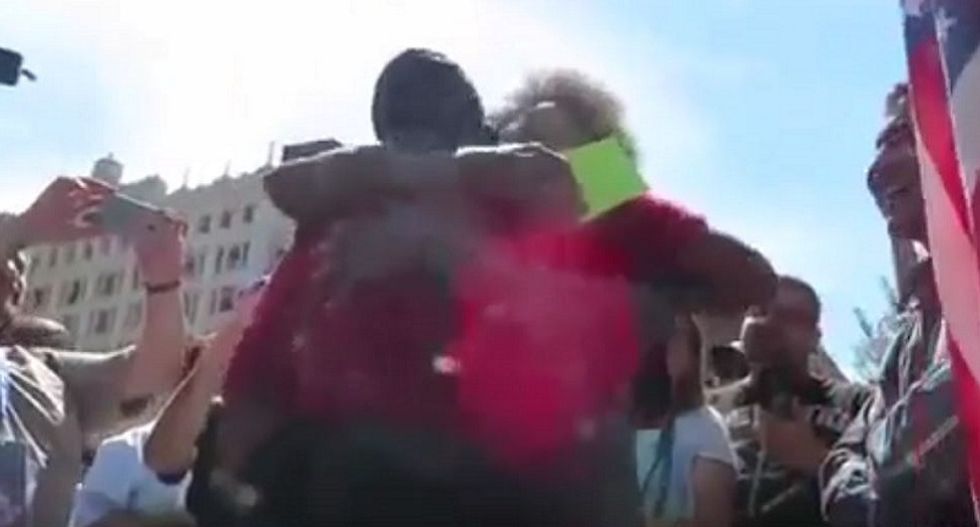 Trump supporter gets a hug at the RNC (Screenshot/YouTube)

An African-American supporter of GOP presidential nominee Donald Trump insisted on Wednesday that "there are plenty of Latinos and blacks who support Trump."

The man, who didn't give his name but said he is from Amityville, Long Island, was speaking in front of cameras and anti-Trump protesters outside the Republican National Convention in Cleveland, calling his opposition "sheeps."

The New World Order is a pervasive conspiracy theory in which a secret cabal of global elites are conspiring to abolish nation-states and rule the world from an autocratic single government.

"I love truth," the man proclaims, then later adds, "Donald Trump for president!"

At one point, a protester asks to give him a hug and the two embrace, while someone can be heard saying "Black lives matter!"

A fellow Trump supporter chimes in that he didn't care about accusations that Trump's wife, Melania, plagiarized parts of her Monday night convention speech.

"We got bigger shit to deal with in this country," he says.

Contrary to what the man said, polling shows unfavorable ratings for Trump among black and Latino voters is high.