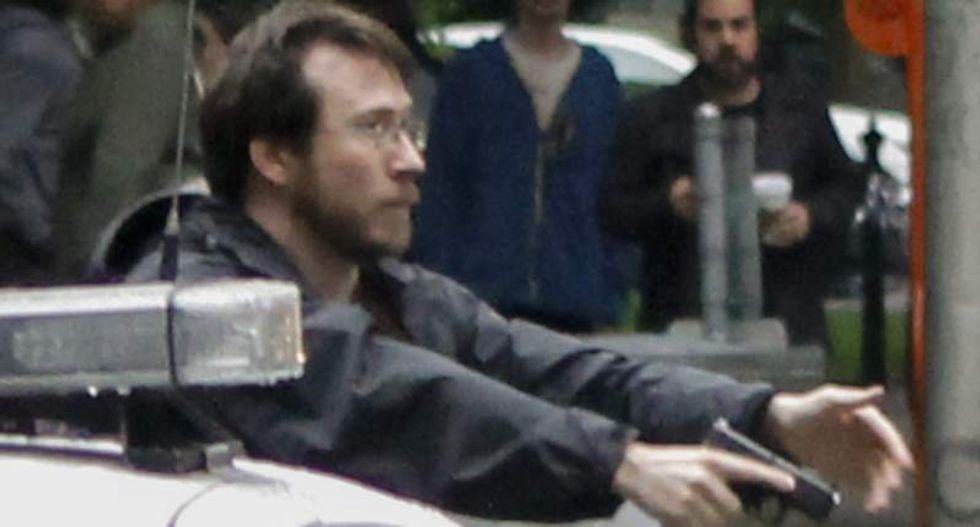 Michael Strickland, the right-wing agitator and Trump supporter seen in this video brandishing a gun at a peaceful Black Lives Matter rally, has been charged with two class A felonies after being arrested and initially released Friday morning on his own recognizance without bail.

At his arraignment today at the Multnomah County Courthouse in downtown Portland Strickland was hit with two felony counts of “unlawful use of a weapon,” as well as misdemeanor charges of menacing and disorderly conduct.

The hearing took place on the same block where Strickland pulled a Glock 27, swept the gun at the crowd while yelling “Get the hell back!” He subsequently outfitted the gun with a large capacity magazine.

At the scene, Strickland said he was only armed in self-defense. But the Multnomah County District Attorney revealed in court that Strickland had six magazines of ammunition on him.

In videos of the incident, Strickland also appears to be far out of the range of any protesters when he menaced them with his gun. Some protesters can be seen facing Strickland with their hands up and urging him to put the gun away and to leave.

As reported first by The Raw Story, the police found a live round chambered in his gun. In its case, the state also said there was an undercover cop in the crowd threatened by Strickland. (A second man detained at the scene, Jessie Sponberg, who ran for Portland mayor in May receiving 1.6% of the vote, was not arrested as initially believed, but briefly detained and questioned before being released.)

That led a judge to slap Strickland with $250,000 in bail and he was returned to custody in the Multnomah County jail. If convicted of the two felonies, he could be sentenced for a maximum of 20 years prison on each count.

Even if he posts bail, Multnomah County Circuit Judge Leslie G. Bottomly prohibited Strickland, who reportedly had a concealed weapons permit, from owning a gun.

In the meantime, Strickland will remain in jail where he might bump into some kindred spirits. Currently also jailed in Multnomah County are Ammon and Ryan Bundy, the two leaders of the armed occupation of the Malheur National Wildlife Refuge, as well as many of their followers as they await trial set for September 7.

Watch video of the incident, as posted online, below.