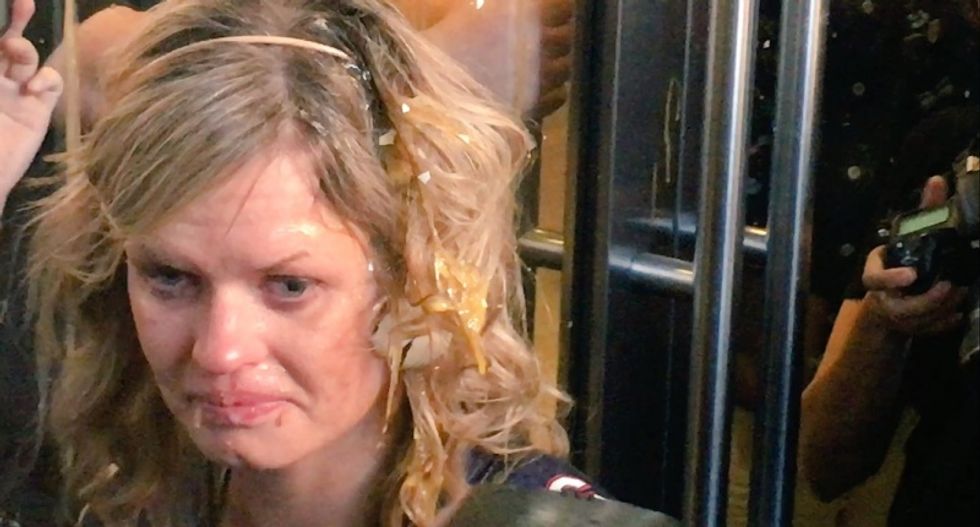 A Trump supporter was attacked by anti-Trump protestors in San Jose, CA. Protestors allegedly threw eggs and bottles while taunting her.

Police in the California city of San Jose, motivated by the political leanings of city officials, allowed an angry mob to assault Donald Trump supporters as they left a rally for the presumptive Republican presidential candidate last month, a lawsuit filed on Thursday alleges.

The civil lawsuit, filed by 14 Trump supporters against the city of San Jose, its mayor, police chief and a number of other individuals, says police funneled Trump supporters outside the city's convention center directly into a crowd of hundreds of "physically violent and aggressive" protesters.

The plaintiffs add that, in addition to creating the dangerous situation, city officials directed roughly 250 San Jose police officers not to intervene amid a melee of "violent criminal acts perpetrated by dozens of anti-Trump protesters."

The San Jose City Attorney, Richard Doyle, said he had not yet read the complaint, but that police made many arrests and "did everything they could do under the circumstances."

A police department spokesman referred inquiries on the lawsuit to the city attorney's office. A representative of the mayor did not immediately respond to a request for comment.

Tense and sometimes violent demonstrations have peppered Trump's political rallies in New Mexico and California in recent months. Protesters are also expected to converge on the Republican National Convention next week in Cleveland.

Hundreds of people in San Jose, many angry over Trump's statements about immigration, gathered outside his event last month. Members of the crowd waved Mexican flags, chanted anti-Trump slogans, and burned Trump hats along with at least one U.S. flag.

The lawsuit alleges the city's mayor, Democrat Sam Liccardo, police chief Edgardo Garcia, and some 40 other people stripped Trump backers of their rights to free speech and assembly.

According to the lawsuit, which seeks unspecified compensation, one Trump backer suffered a broken nose after being punched, while another was pelted with eggs and spat on.

At one point, the lawsuit says, a 14-year-old boy was struck in the back of his head as members of the crowd shouted, "Kill him!" The suit also says a 71-year-old woman had her hair pulled and her glasses broken.

Speaking at a campaign event the day after the events in San Jose, Trump described the rally as "a love fest inside. No problems whatsoever." But then his supporters "walked out and they got accosted by a bunch of thugs," he said.

"The city is very committed to first amendment rights and protecting people," Doyle said on Thursday. "It's unfortunate that some individuals committed violence."