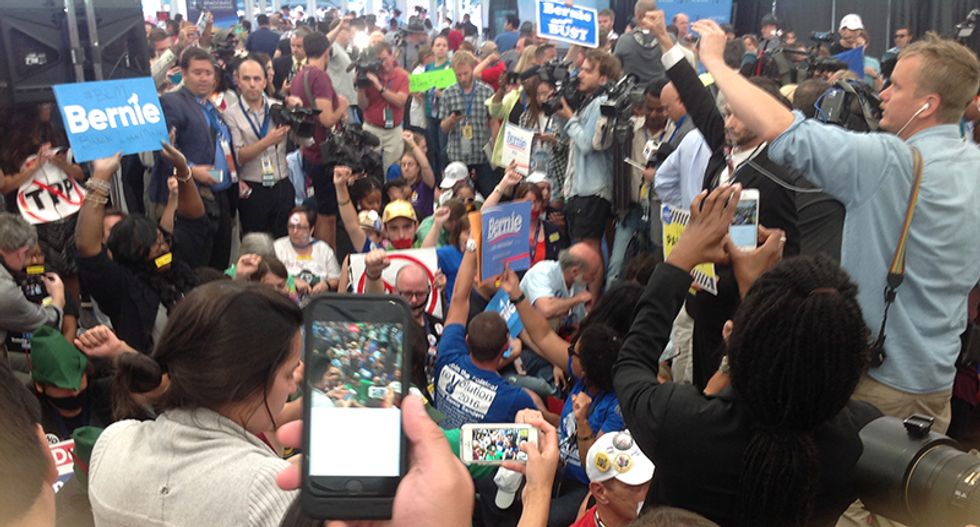 Bernie Sanders announced Hillary Clinton to be the official nominee of the Democratic Party and some of his delegates -- along with many protesters -- walked off the floor of the convention.

Police shut the doors and did not allow those that left to come back inside. Those who walked off were delegates and have passes to be in the building, yet were being blocked. When reporter Rania Khalek asked police why they were blocking the doors, police would not give her an answer. She was told not to touch the doors and if she walked out she would not be allowed back in. The protesters were being completely silent and sitting o the floor in an act of civil disobedience.

For those that were shut out of the building, it's worth noting that the heat index at 7:45 p.m. at night was 92 degrees.

"We're here to represent the constituents," one North Dakota delegate said in a video.

Jeffrey Eidd a delegate from North Dakota working with the Coalition of 57 told Khalek on video that the police were trying to protect members of the media.

Norman Solomon, a delegate for Bernie Sanders from California said that he works with the online sharing network of Sanders delegates and supporters -- and that they were not responsible for the walkout.

Raw Story also heard reports from British journalist Laurie Penny who said that police blocked media from getting out of the media tents to cover the story, and also preventing protesters from entering the tents.

Delegates aren't being allowed in. Media not allowed out. This is the scene inside the tent. #DemsInPhilly https://t.co/M4TzSHL7B2
— Laurie Penny (@Laurie Penny)1469574991.0

Raw Story reporter Tom Boggioni was inside the media tent tonight and reported via Skype that protesters were staging a sit-in in the middle of the floor. "The group I’m seeing knew this was the press tent and knew it would be mostly full and they came directly in chanting. Very well organized. Now a few have split off and are holding court while the rest are doing the sit-in," Boggioni continued.

The media was officially been put on lockdown. But it was lifted by 8:10 p.m. ET.

"Most of the protesters are gone from the media tent, all the doors have been secured by police with only one available to leave, but media can get back in," Boggioni reported. "I talked to two cops and they said it seemed to be easing and they didn’t expect anything. Also too: all of them have taped over their badge numbers."

Here's one live video from Khalek:

The hall is beginning to look empty as people are walking out and news of the walkout is spreading.