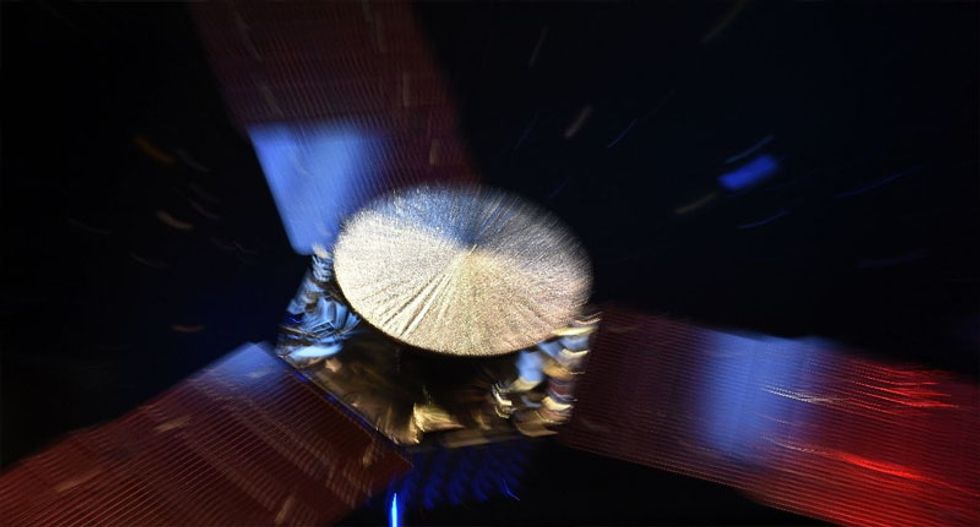 Juno, an unmanned NASA spacecraft, is barrelling toward Jupiter on a $1.1 billion mission to circle the biggest planet in the solar system and shed new light on the origin of our planetary neighborhood.

On July 4 and 5, the solar-powered vehicle -- about the size of a professional basketball court -- should plunge into Jupiter's poisonous atmosphere to begin orbiting for a period of almost two years.

Watch live video, via NASA, below:

Jupiter is the fifth planet from the sun. Its atmosphere is made up of hydrogen and helium and packed with so much radiation that it would be more than 1,000 times the lethal level for a human.

The gas giant is also shrouded in the strongest magnetic field in the solar system.

"Jupiter is a planet on steroids," said Juno principal investigator Scott Bolton, of the Southwest Research Institute in San Antonio, Texas. "Everything about it is extreme."

Jupiter is perhaps best known for its Great Red Spot, which is actually a massive storm, bigger than the Earth, that has been roiling for hundreds of years.

The planet is marked by cold, windy clouds of ammonia and water that appear as reddish, brown and beige stripes and swirls.

Getting close, and surviving, is no easy feat. Even though the spacecraft is entirely robotic and controllers on Earth can do nothing at this stage, Bolton admitted this week to being nervous about its entry into orbit, five years after its launch from Cape Canaveral, Florida.

Steve Levin, Juno project scientist from NASA's Jet Propulsion Laboratory, said water figures are the most important ones that Juno is going to bring back.

"If Jupiter formed far from the sun, where it is cold, out of blocks of ice... you would get a different amount of water inside Jupiter than if it formed closer to the sun than it is now."

The spacecraft will use a microwave radiometer instrument to measure water, essentially a radio receiver that can help Earth-bound scientists "see" inside Jupiter's atmosphere.

The spacecraft will rotate as it circles Jupiter, providing something like a three-dimensional CAT scan, added Levin.

"Oddly enough, Jupiter's interior is quite a mystery to us and that is ironic because it is made up of two of the simplest and abundant elements in the universe -- that's hydrogen and helium," said Jack Connerney, deputy principal investigator at NASA's Goddard Spaceflight Center.

"But the problem is it is under such pressure in that environment that it behaves in very mysterious ways."

A dense core of heavy elements may be at the heart of Jupiter's thick, hot -- up to 50,000 degrees -- and soupy center, but scientists are not sure.

The mission also aims to learn more about how solar wind influences auroras by studying the particles that bombard the atmosphere on Jupiter and make it glow.

Juno is not the first spacecraft to orbit Jupiter but NASA says its orbit will bring it closer than its predecessor, Galileo, which launched in 1989.

That spacecraft -- after a fruitful 14-year mission during which it found evidence of subsurface saltwater on Jupiter's moons Europa, Ganymede and Callisto -- made a death plunge into Jupiter in 2003.

NASA says Juno will get closer than Galileo -- this time within 3,100 miles (5,000 kilometers) above the cloud tops -- while dodging the highest radiation regions on Jupiter "by approaching over the north, dropping to an altitude below the planet's radiation belts...and then exiting over the south."

The spacecraft is equipped with a radiation shielded electronics vault to protect the machinery on board.

But first the spacecraft must survive what NASA described as a "suspenseful orbit insertion maneuver," during which the main engine fires for 35 minutes in order to slow Juno down by about 1,212 miles per hour (542 meters per second) so it can enter orbit.

If it does manage to orbit, Juno will circle the gas giant for 20 months.