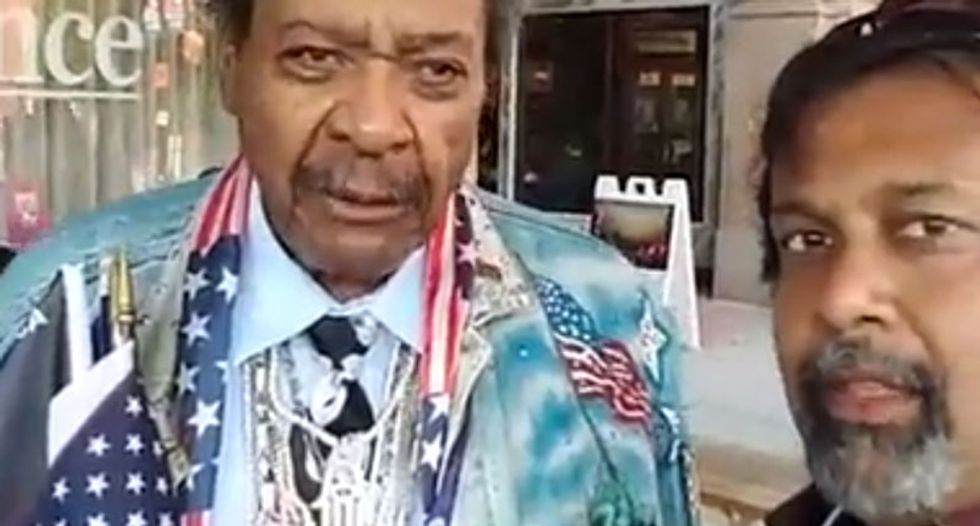 It’s a shame famed boxing promoter Don King was booted from speaking at the 2016 Republican National Convention in Cleveland as Donald Trump wanted. A verbal pugilist and a reputed con man of Trumpian renown, King would have fit right into the Monday line-up.

The opening night was dubbed “Make America Safe Again,” and featured a parade of speakers lamenting loved ones lost to “Islamic terrorism” overseas or to “illegal aliens” at home. A couple of times when speakers talked about killing terrorists, the crowd of RNC delegates, officials, and hangers-on clapped and cheered.

Despite the bloodlust from the RNC podium, it’s unlikely any of the speakers has been as up close and personal to killing as Don King. Fifty years ago on the streets of Cleveland, Don King, when he ruled the city’s numbers racket, stomped a man to death who owed him $600.

So when I spotted the 84-year-old King on the Cleveland sidewalks outside the security perimeter of the RNC I asked him a few questions. Breezing past star-struck fans and hulking bodyguards hanging back, I began livestreaming.

I asked King why was he rejected by the RNC despite’s Trump’s determination to have him speak. Consistent with his schtick of invoking Black solidarity King said, “The RNC is living in 1865.”

King pivoted to why he supported Trump, a man who in 1989 took out tabloid ads that essentially called for the legal lynching of five Black and Hispanic youth wrongly accused (and then convicted) of a brutal rape.

Launching into what Jack Newfield once described as his “rap opera filibuster,” King told The Raw Story, “We want America First. And I’m fighting to make America great again. I’m going with the will of the people. Trump has brought out more votes than anyone in the history of the Republican Party.”

Don King, sporting more bling than Tiffany’s and a faded denim jacket painted with the flag-raising at Iwo Jima has done well for himself in America whatever his incarnation. But he wants Trump to get “rid of this system,” and replace it with “liberty, justice, and equality.”

Seeing it was time to deliver a left hook, I asked King about delivering a deadly blow to Sam Garrett’s head as he lay prone on the streets, promising, “Don, I’ll pay you the money.”

King expressed “deep contrition” with the ease of a well-rehearsed line. But proving himself a stellar Republican he flipped to victimization instantly, bemoaning “stand your ground is not for Black folks, that’s the code, that’s for white folks.”

When I asked King about allegations that he stole a million dollars from Muhammad Ali. All hell broke loose. A woman in the crowd grabbed my arm, trying to drag me away, while goons moved in trying to protect King from some tough blows.

Watch the video for yourself of the man who left with the observation, “If you can count your money, you ain’t got none.”

Arun Gupta contributes to The Washington Post, YES! Magazine, In These Times, The Progressive, Telesur, and The Nation. He is author of the forthcoming, Bacon as a Weapon of Mass Destruction: A Junk-Food Loving Chef’s Inquiry into Taste, from The New Press.