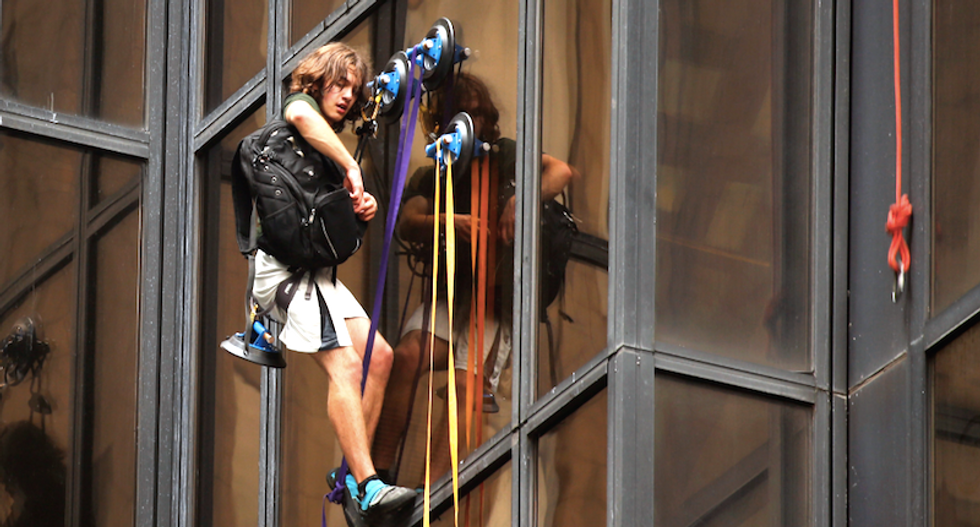 A 20-year-old Donald Trump supporter who scaled the Trump Tower in Midtown Manhattan on Wednesday for three hours using suction cups and a climbing harness was pulled inside through a window by police who had tried to coax him into the building throughout the escapade.

The man reached the 21st story of the 58-story tower on Fifth Avenue which is headquarters for the election campaign of Donald Trump, the U.S. Republican presidential nominee.

As the climber from Virginia who wore a backpack scaled the tower's glass exterior, police removed large window panels above him and several officers, some wearing helmets, stood at the windows. The climber shifted his route several times in what appeared to be an attempt to get around the police.

At a news conference later the New York Police Department said the unidentified man did not express a desire to harm anyone and said his mission was to get a meeting with Trump.

The man was undergoing psychiatric evaluation and would be arrested, police said.

Police had earlier closed several streets near the building in one of the city's busiest areas and put an inflatable landing pad on East 56th Street between Madison and Fifth Avenues.

The New York City Police Department said on Twitter that its special operations division and emergency crews had been sent to the building.

Reports of the climber first surfaced on Twitter and social media around 4 p.m. (2000 GMT). The police then tried to coax him inside, first by throwing a rope in his direction and then by opening a large grate directly above him.

In a video that was uploaded to YouTube on Tuesday, the man discussed climbing the tower in a message addressed to Trump. He wore a black hooded sweatshirt and long hair was over his eyes. He referred to himself as an "independent researcher" seeking a private audience with Trump to discuss an unspecified important matter.

"The reason I climbed your tower was to get your attention," he said in the video and then encouraged people to vote for Trump.