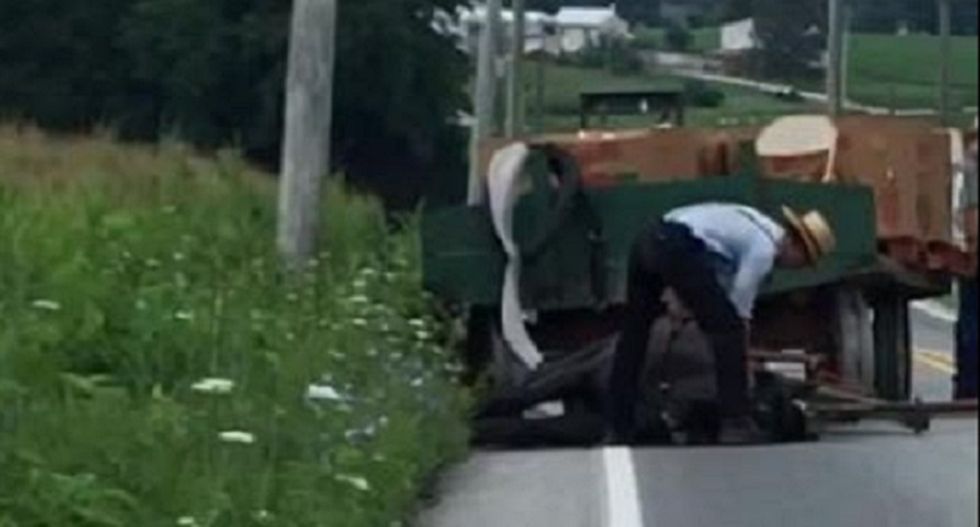 A horse had to be euthanized after it collapsed while being allegedly beaten and overworked by its Amish handler, PennLive reports.

The man, Marvin Sensenig, 20, of Lancaster County, has been charged with animal cruelty in what authorities are calling a straight-forward case. Police arrived Tuesday to find the animal lying in the roadway. Firefighters tried to keep it cool by spraying it with water, but ultimately a decision was made to euthanize the horse.

"Sensenig used one horse to pull a farm wagon with a burden too great for a single horse. The horse became overheated due to the hot temperatures and collapsed onto the asphalt," according to court documents obtained by PennLive. "Sensenig then was seen kicking the horse in the abdomen and the back of the head, and punching the horse in the head."

The horse had to be put down as a result of Semsenig's actions, the filing states.

Tawn Crowther reported the incident to 911 after witnessing the animal struggling to pull a cart full of watermelons and two grown men. The horse was unable to pull the wagon, and as a result she wrote that one got out and began to beat it to the point it collapsed. She described the incident in a Facebook post that has gone viral.

"At that point he continued to kick, hit and pull on the poor seemingly dying animal," she recounted.

Crowther's post contains photos of the horse lying on the asphalt and a man leaning over it.

"You simply cannot treat animals this way," Lancaster County District Attorney Craig Stedman told PennLive. "And if you do, we will hold you accountable."

Crowther said police initially seemed unsure whether they had jurisdiction over Sensenig because he is Amish.

"They came to evaluate the situation, only to tell me that they are unsure of the outcome. Because Amish are governed under a different law. Are you kidding?" she wrote. "Isn't abuse standard across the board? So if I decide to beat and kill animals I need to change my religion to be above the law?!? Are you telling me the police are powerless against the Amish?!?"

She updated the post to note authorities contacted her and were taking on the case.

Nearly 13,000 people have signed a petition seeking justice for the horse.