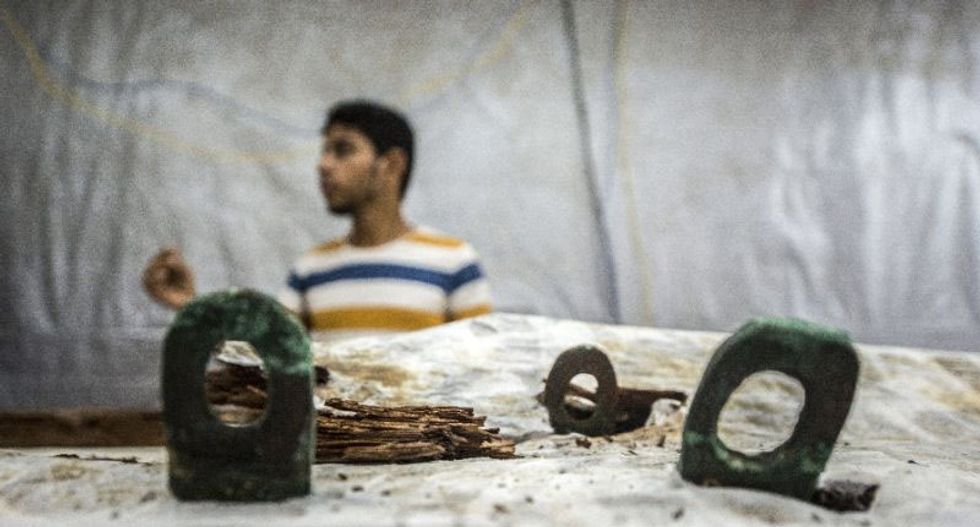 Metal pieces of the second solar boat of Pharaoh Khufu are seen at the restoration laboratory, located behind the Great Pyramid of Cheops on the Giza Plateau (AFP Photo/Khaled Desouki)

A piece of wood recovered at a dig near the Great Pyramid of Giza shows for the first time that ancient Egyptians used metal in their boats, archaeologists said Wednesday.

Circular and U-shaped metal hooks were found in one of the components of a boat, discovered the same year as Khufu's "solar boat", buried near the Great Pyramid.

Solar boats, buried in pits next to royal burial chambers, may have been used for a pharaoh’s funeral procession, while others were intended for travels in the afterworld.

From the boats found across Egypt, "we have not found the use of metals in their frames like in this boat", Mohamed Mostafa Abdel-Megeed, an antiquities ministry official and expert in boat-making in ancient Egypt, told AFP on the sidelines of a Cairo press conference.

The U-shaped hooks were used "to place the paddles to prevent friction of wood against wood", said Sakuji Yoshimura, an Egyptologist from Japan.

The Great Pyramid -- also known as the Pyramid of Cheops -- is the largest of the three Giza pyramids. It houses the tomb of Pharaoh Khufu who ruled more than 4,500 years ago.