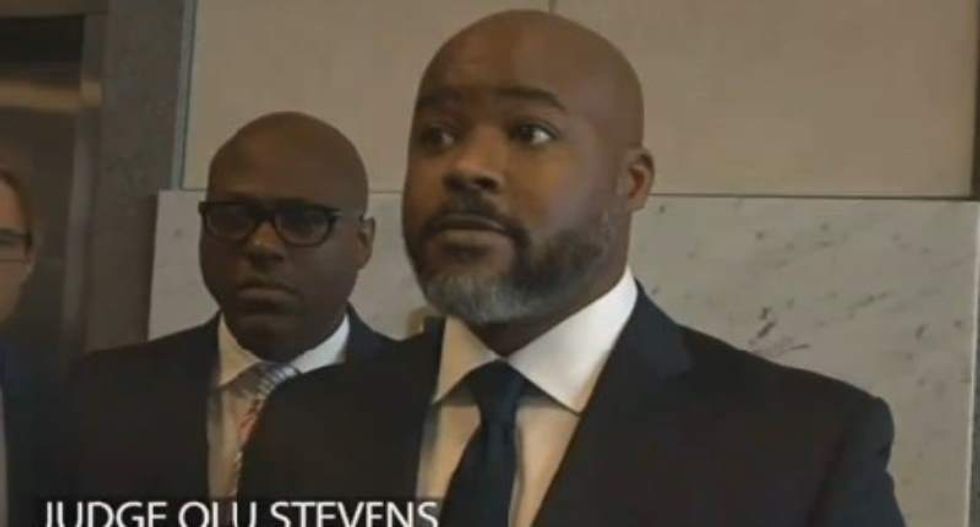 A black Kentucky judge was suspended without pay for 90 days after admitting on Monday that he should not have made racially charged comments, including complaining on Facebook that a prosecutor had deliberately sought all-white juries.

Judge Olu Stevens was accused by a state commission of eight counts of violating Kentucky's judicial code of conduct after he criticized Commonwealth's Attorney Tom Wine on social media and in a speech, among other statements.

"I recognize how serious it is to accuse someone, either expressly or implicitly, of racism," Stevens said in a statement released Monday as part of a settlement with the commission, which had investigated a complaint filed by Wine last year. "I do not believe Tom Wine is a racist."

Those instances prompted Wine to ask the state if Stevens' conduct was appropriate.

Stevens complained in Facebook postings about Wine's tactics and questioned whether they were racially motivated. He also spoke about the case in a presentation to the Louisville Bar Association.

In his statement on Monday, Stevens said he had been wrong to accuse Wine of advocating for all-white juries.

An attempt at mediation failed to resolve the issue, which led to the state's involvement.

The commission also charged Stevens with misconduct based on comments he made during a 2015 sentencing. In that instance, Stevens said he was offended by the burglary victim’s impact statement, which indicated the victim's 3-year-old daughter had grown afraid of black men as a result of the home invasion.

The unpaid suspension takes effect immediately, said Jimmy Shaffer, the commission's executive secretary. Stevens had been under an indefinite paid suspension during the investigation, Shaffer said.

In a statement, Wine said he accepted Stevens' apology and harbors no animosity toward him.

Watch a report on Stevens' suspension, as aired on WDRB-TV, below.