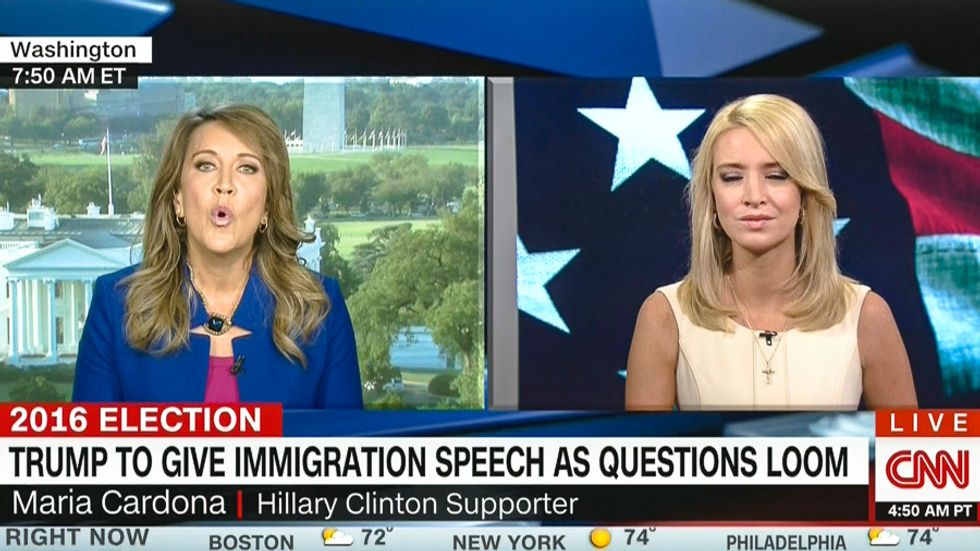 In preparation for what the Trump campaign has called a major immigration speech on Thursday, McEnany defended the GOP nominee's apparent "softening" on his promise to deport every undocumented immigrant in the United States.

"He meant deporting all of them," CNN host Alisyn Camerota reminded McEnany. "Does that stand this week?"

"He's setting priorities," McEnany insisted. "That may be the last priority. But his priorities are those that reflect the voters he's speaking to. And the president, after all, should reflect voters."

Cardona argued that Trump's promise of "humane" deportation was a "clueless" policy.

"What does that mean?" she asked. "That there will be cushions on the buses and they'll get milk and cookies on the way to the border. Who knows?"

According to Cardona, Trump "has no idea how existing immigration law works."

McEnany shot back by accusing the Obama administration of "releasing 20,000 criminals, 200 of which have murder convictions, 800 of which had sexual offenses."

"Kayleigh continues to bring up this figure," Cardona replied. "The fact of the matter is that under both George W. Bush administration and the Obama administration, there are some convicted criminals who have been released."

"But guess why?" she continued. "It is because many of them -- most of them, in fact -- have actually served their sentence here in the U.S. jails. In addition, many others have been granted release by immigration judges and immigration courts. Additionally, there are various countries -- China, Cuba, Vietnam -- who don't accept deportation, who don't accept removals back to their own home country."

"So again, cluelessness when it comes to real immigration law, what we are really facing in terms of the solutions that are needed."

McEnany seemed stunned by Cardona's answer, blinking 40 times in less than a minute -- or every 1.25 seconds. In comparison, the average person blinks every four seconds. Experts say that "[s]tress and anxiety tend to increase a person's blink rate, and this can sometimes give away a lie."