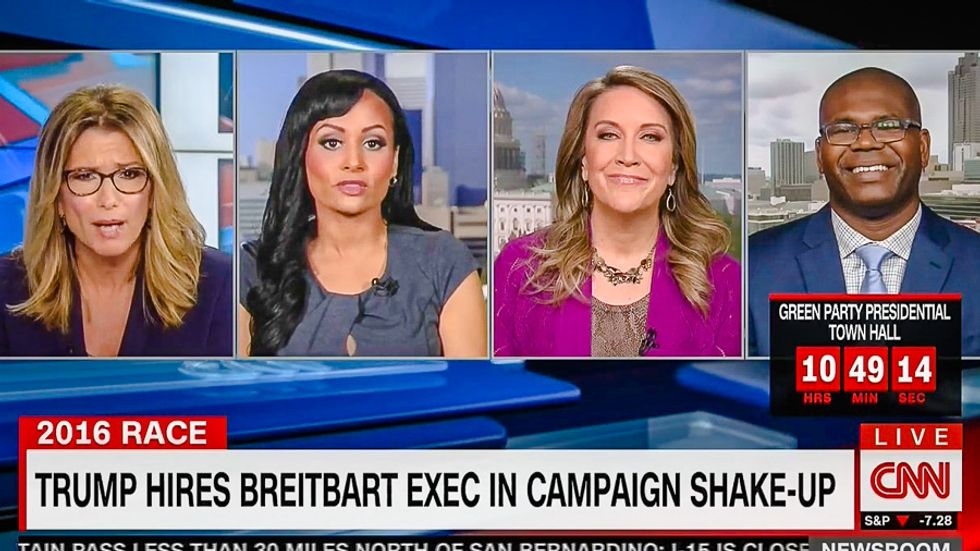 Trump campaign spokesperson Katrina Pierson left a CNN panel speechless on Wednesday after she denied that the campaign had undergone a "shake-up" after media reported a major shifting of roles at the highest levels of the organization.

According to reports on Wednesday, Trump hired Breitbart News Chairman Stephen Bannon as the campaign CEO and promoted Kellyanne Conway to the role of campaign manager. The move was seen as a demotion for embattled campaign chairman Paul Manafort.

CNN's Carol Costello hosted a panel of guests on Wednesday to discuss the changes, which was derailed when Pierson lashed out at the media for calling the move a "shake-up."

"The media and many on the right who have always been vocal against Mr. Trump have been writing this campaign's obituary for over 400 days and it hasn't worked yet," Pierson told the group. "The thing is, when we are talking about campaign additions -- and I know CNN is focusing on [Breitbart's] Bannon for whatever reason. He's not in charge of communications, he's just the CEO."

"But he has a prominent role in the Trump campaign," Costello pointed out.

"But that brings me to my next point, Carol," Pierson continued. "We have not spent nearly as much time talking about Hillary Clinton's campaign infrastructure, particularly Huma Abedin and her dual role at the State Department and the Clinton Foundation."

"I know you want to deflect," Costello acknowledged. "And I appreciate that because that's your job."

But Pierson missed the CNN host's remark because she was ranting about "direct ties to the Russian government" within the Clinton campaign.

Costello and the two other panelists were speechless.

"That's because Donald Trump just shook up his campaign for the second time in a two month period!" Costello exclaimed.

"No, he didn't," Pierson shouted back. "He added. Donald Trump adds people to his campaign. No one is out. When you shake up your campaign that usually means someone is out."

"CNN is probably the only one reporting that some shake-up is happening," the Trump spokesperson insisted.

"I dare to suggest this," Costello said. "That no one was ousted simply because Mr. Trump didn't want this to appear to be a shake-up."

"This is not something that people are being replaced," Pierson declared. "This is an expansion of the team."

"Even Fox News is calling this a shake-up," Costello stated, shaking her head.