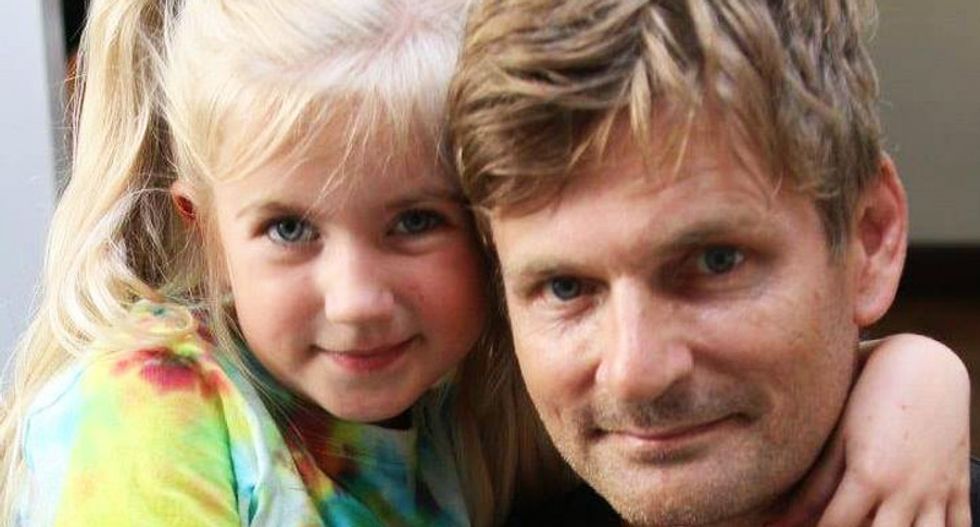 A California man and his 7-year-old daughter had a terrifying run-in with the Arizona Highway Patrol Friday night on their way to visit the Grand Canyon.

In a lengthy Facebook post, Ken Walton described the experience, in which he and his daughter were held at gunpoint by an out-of-control highway patrolman.

Late Friday night, Walton wrote, "Tonight, I was arrested at gunpoint by an Arizona highway patrol officer who threatened to shoot me in the back (twice) in front of my 7-year-old daughter. For a moment, I was certain he was going to kill me for no reason. I'm alive, and I need to share the story. PLEASE SHARE IT, because I have an important reason for staying up past 1AM to write it down."

He went on to say that he and his daughter were making their way to the Grand Canyon in a rented Toyota Camry they'd picked up in Las Vegas.

"In Williams, Arizona, as I exited Interstate 40 to head north toward the Canyon rim, I was pulled over by an AHP officer who'd been tailing me for a couple of miles. I hadn't been speeding, so I wondered if perhaps the car had a broken taillight or something. I rolled down my window and waited," he said.

Instead of coming around to the driver's side, however, the officer "rapped on the rear passenger side window with his pistol. My daughter, who was sitting inches from the barrel of his gun, jumped with fear as the officer yelled at me to roll down the front passenger window, his service weapon pointed directly at me."

"My daughter rolled down her window and I explained that we were in a rental car, that we had no weapons, and I was having trouble figuring out how to roll down the front passenger window from my driver's side door," Walton reported.

"My daughter panicked and tried to get out of her booster seat to reach forward to roll down the front window, and the officer screamed her at her not to move as he pointed his pistol at her," Walton wrote.

On the officer's orders, Walton exited the car, where he was ordered to face away from the officer and assume to position to be arrested at gunpoint.

"Then, as I had my hands in the air, he yelled, at the top of his lungs, in a voice I will never forget, as my daughter looked on in terror, 'Get your hands away from your waist or I'll blow two holes through your back right now!'" Walton said, noting that his hands were already in the air when the officer made the threat.

"I was utterly terrified," Walton said. "I've heard stories of police yelling out false things like this before they unjustifiably attack someone as a way to justify the attack, and I thought this was what was happening to me. I braced for bullets to hit me and all I could think of was my daughter having to watch it happen and being left alone on the side of the highway with an insane, violent cop."

The officer never fired and Walton was handcuffed and placed in the back of the officer's cruiser while more police arrived.

"Why was I arrested?," he wrote. "The car I had rented had previously had its front license plate lost or stolen, so the car rental company reported this to the Nevada DMV. The Arizona highway patrol officer, who looked up my plate number while he was tailing me, misinterpreted this Nevada DMV report as meaning that I was driving a car with a stolen license plate, and somehow this prompted him to approach me at gunpoint and threaten to kill me in front of my little girl."

Walton said that he confronted the officer for overreacting and for threatening to kill him in front of his little girl.

"He stood by his story that I had made a threatening movement toward my waist, and I said it wasn't true, and he said this wasn't the place to discuss it. He let me go attend to my daughter but continued to 'detain' us for another 20 minutes as he talked to his supervisors, presumably plotting damage control."

Walton got the officer's name -- Oton Villegas -- and badge number, his supervisors' names and information. He said that his daughter was thoroughly traumatized by the event and that he has not decided yet what recourse to take.

In the end, Walton urged anyone reading the story to think about how it could have turned out differently. "(I)f I'd looked just a little bit more threatening to him -- because I was black, or young, or long-haired, or tattooed, or didn't speak English -- I believe he might have pulled the trigger."

"If you are a person who has ever looked skeptically at the claims of Black Lives Matter, or others who talk about police violence, I urge you to consider what happened to me and put yourselves in the shoes of others. I just survived a bizarre gunpoint situation in which I was as innocent as Philando Castile, who was not as lucky as I was," he concluded.