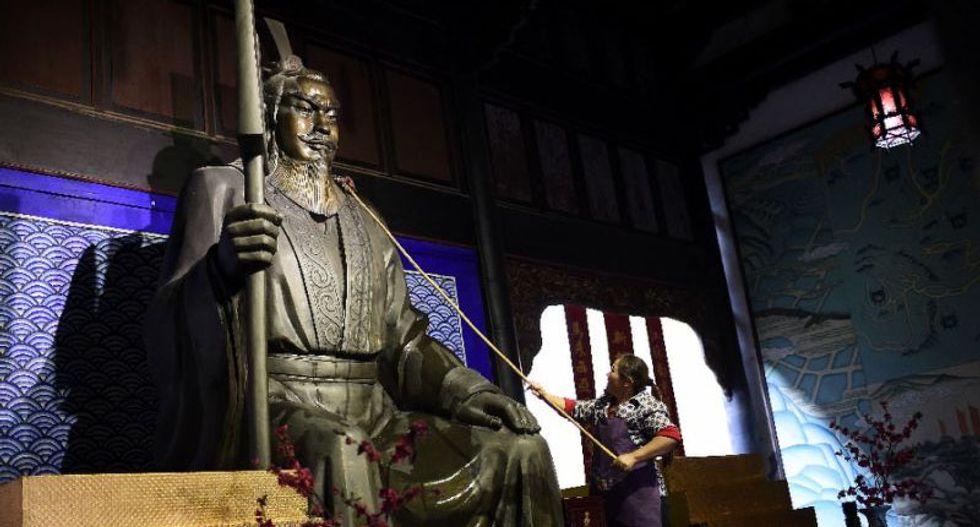 Geologists have found the first evidence for China's Great Flood, a 4,000-year-old disaster on the Yellow River that led to birth of the Xia dynasty and modern Chinese civilization, researchers said Thursday.

The findings in the journal Science may help rewrite history because they not only show that a massive flood did occur, but that it was in 1920 BC, several centuries later than traditionally thought.

This would mean the Xia dynasty, led by Emperor Yu, may also have started later than Chinese historians have thought.

Yu gained fame as the man who was able to gain control over the flood by orchestrating the dredging work needed to guide the waters back into their channels.

Restoring order after chaos earned "him the divine mandate to establish the Xia dynasty, the first in Chinese history," said the study, led by Wu Qinglong, professor in the department of geography at Nanjing Normal University.

Stories about Emperor Yu laid the ideological foundation for the Confucian rulership system, but in recent generations, some scholars have questioned whether it ever happened at all. Perhaps, they say, it was all a myth designed to justify imperial rule.

So geologists investigated along the Yellow River in Qinghai Province, examining the remains of a landslide dam and sediments from a dammed lake and outburst flood.

What they found suggests a catastrophic flood that is one of the largest known floods on Earth in the last 10,000 years, said co-author Darryl Granger, professor in the department of Earth atmospheric planetary sciences at Purdue University.

The floodwaters surged to 38 meters (yards) above the modern river level, making the disaster "roughly equivalent to the largest Amazon flood ever measured," he told reporters on a conference call to discuss the findings.

The flood would have been "more than 500 times larger than a flood on the Yellow River from a rainfall event," he added.

"This cataclysmic flood would have been a truly devastating event for anyone living on the Yellow River downstream."

Since such floods toss debris and sediment all over, mixing old soil with new, the scientific team used human remains to pin down the timing of the disaster.

Three children's skeletons were found in the rubble of an earthquake, which is believed to have triggered a landslide, researchers said.

That landslide created a dam. Water built up around the dam and eventually burst through, unleashing the flood.

Radiocarbon dating on the children's bones showed that they died in 1920 BC, coinciding with a major cultural transition in China.

"This is the first time a flood of this scale -- large enough to account for it -- has been found," said David Cohen, assistant professor in the department of anthropology at National Taiwan University.

"The outburst flood... provides us with a tantalizing hint that the Xia dynasty might really have existed," he told reporters.

"If the Great Flood really happened, perhaps it is also likely that the Xia dynasty really existed, too. The two are directly tied to each other."

Now that researchers have evidence to back up the tales in ancient texts, the Xia dynasty could be considered as starting around 1900 BC, instead of 2200 BC as previously thought, they argue.

"Great floods occupy a central place in some of the world's oldest stories," wrote David Thompson of the University of Washington, Seattle in an accompanying commentary in Science.

"And Emperor Yu's flood now stands as another such story potentially rooted in geological events."

On Thursday, CNN reported that Republican gubernatorial candidate David Perdue is vowing, if elected in Georgia, to create a force of "election police" to investigate voters for wrongdoing.

"Perdue's plan would create 'an Election Law Enforcement Division in the State of Georgia' that would 'be charged with enforcing election laws, investigating election crimes and fraud, and arresting those who commit these offenses,' according to a release from his campaign," reported Dan Merica. "Perdue's plan also called for 'election results to be independently audited before certification.'"