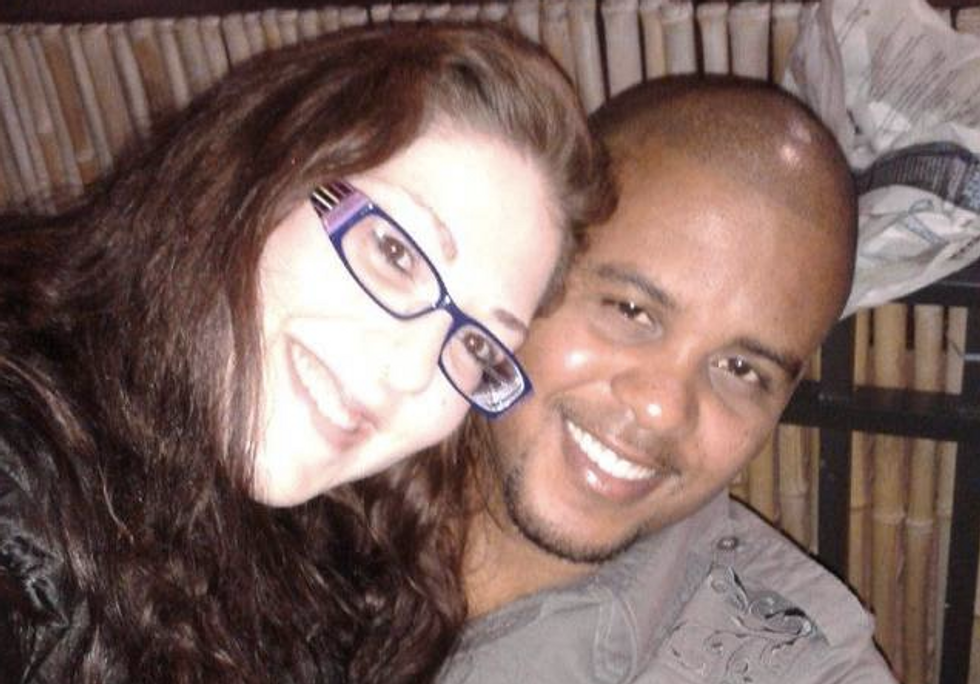 Image: Photo of estranged partners Brooke Tuchinsky and Sean Barnes before their breakup which culminated in gun violence in a Miami Denny's (Screen capture)

A Miami man is invoking Florida's controversial "Stand Your Ground" law in the shooting of his unarmed ex-girlfriend in a restroom at a Denny's restaurant.

According to the Miami Herald, accused gunman Sean Barnes is asking a Miami-Dade Circuit Court Judge Charles Johnson to dismiss the attempted murder charges against him on the grounds that he was defending himself and in fear for his life.

Barnes claims that when he followed his former girlfriend Brooke Tuchinksy into a Denny's women's bathroom in August 2013, he saw her "grab a shiny object" out of her purse, at which point he opened fire, striking Tuchinsky in the face and breaking her jaw.

Tuchinsky survived the attack and is expected to testify in court on Wednesday that Barnes was trying to kill her.

Days before the attack, in the midst of a stormy, acrimonious breakup, Barnes reportedly told Tuchinsky, "I bought a new gun and would love to use it on you and make it look like an accident or self-defense.”

The "Stand Your Ground" law is the brainchild of right-wing lobbying shop the American Legislative Exchange Council (ALEC), a secretive cabal of lawmakers and corporate lobbyists designed to foist a radically conservative agenda on the country through laws passed at the local level.

Florida ratified "Stand Your Ground" in 2005. The law, said the Herald, has been criticized for "fostering trigger-happy vigilante justice, and giving killers a way to beat murder charges. The law eliminated a citizen's duty to retreat before resorting to using deadly force. It also gave judges -- before the case is ever heard by a jury -- greater leeway to grant 'immunity' to someone they find acted in self-defense."

Barnes is hoping to convince Judge Johnson that Tuchinsky has a long history of acting dangerous and unstable. Court papers show that two prior relationships ended in restraining orders against her. Barnes says Tuchinsky stalked him after their breakup, set fire to furniture on his porch, slashed his mother's tires and hacked into his Facebook account.

Both Barnes and Tuchinsky took out restraining orders against each other in the months after their split. Barnes said he had to change his phone number more than 10 times to stop receiving abusive calls and texts from Tuchinsky.

For whatever reasons, the two agreed to meet at the Denny's on Biscayne Boulevard in Miami on the night of the attempted killing. The two had to be separated by restaurant staff after they began to argue loudly.

Tuchinsky reportedly left the restaurant, then returned. The defense team says that she threatened Barnes and then entered the women's restroom. Tuchinsky maintains that she did not address Barnes, but had only returned to the restaurant to use the facilities.

"His defense does not outline exactly what the threat was," wrote the Herald's David Ovalle, "or why Barnes, if he felt threatened, did not leave the restaurant or stay at the table."

Instead, he followed her into the women's restroom and shot her.

“Barnes pushed open the door with a crazy look on his face and he shot her,” says a police report from the night of the incident. “Tuchinsky advised that she was not armed with any weapons and did not know why Barnes shot her in the face.”