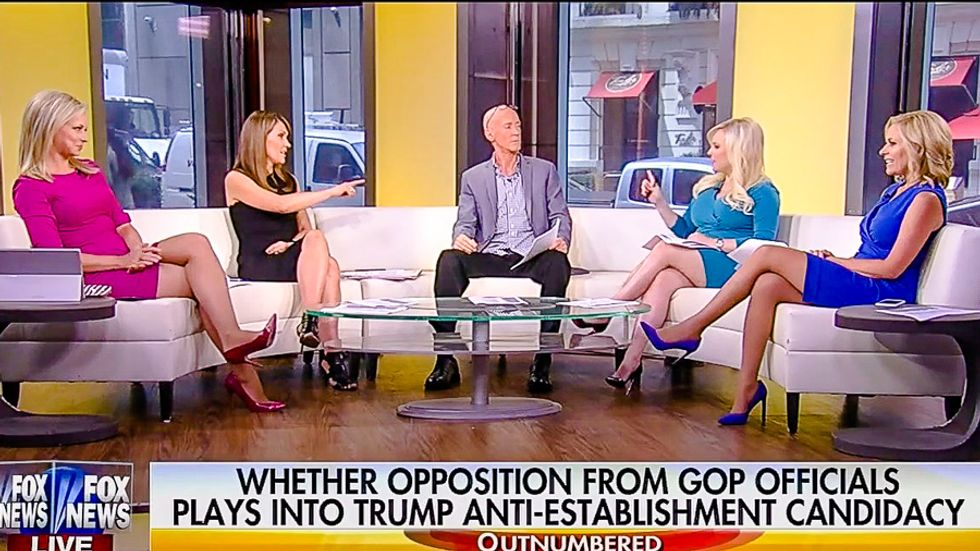 The hosts of Fox News Outnumbered refused to let Fox Business contributor Bernard McGuirk off the hook on Wednesday after he asserted that Republican presidential nominee Donald Trump was "the ultimate feminist."

While discussing the news that Maine Sen. Susan Collins had become the latest high profile Republican to say she would not vote for Trump, Fox News host Sandra Smith noted that the GOP nominee was continuing to struggle with women voters.

McGuirk argued that a defection coming from a high-ranking Republican woman should not hurt Trump.

"Because I'll tell you what," McGuirk opined. "Donald Trump is the ultimate feminist."

"We can't you let you get away with that," co-host Susan Smith remarked.

"If a woman attacks Donald Trump, he'll attack her back just like he would with a man!" McGuirk bellowed. "He doesn't look at her as a delicate little flower."

"Facts are a stubborn thing," co-host Meghan McCain shot back. "He's doing very poorly with women, specifically college educated women, which is a demographic that normally just easy for Republicans to scoop up. He's got you, Bernard, he needs me. He needs Sandra."

"It has nothing to do with misogyny or sexism," McGuirk insisted.

"I like you, I respect you," McCain interrupted. "In all fairness, it's directed at us! It's not directed at you. He's already got white men."