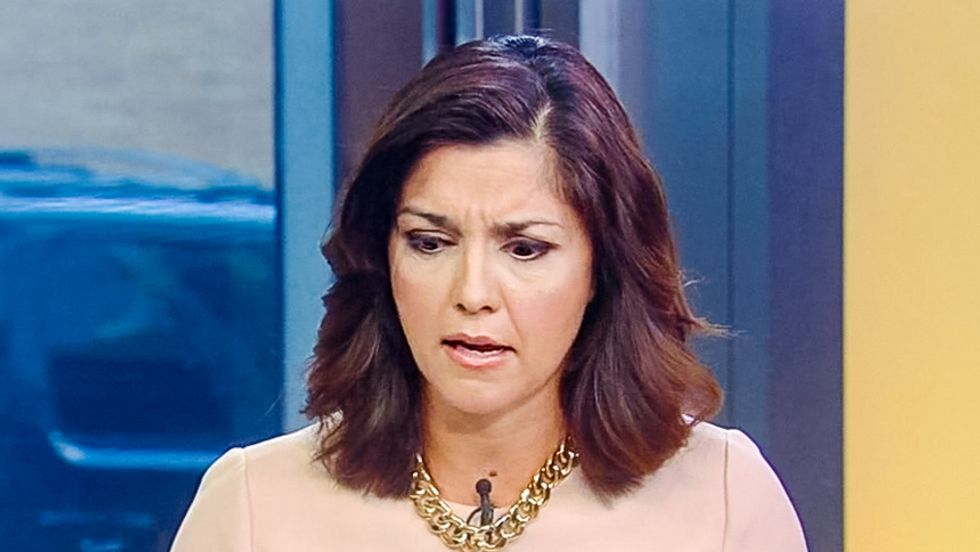 In a hilariously thick-headed discussion on Wednesday's edition of the Fox News show Outnumbered, the co-hosts attacked CNN's Brian Stelter and "Spanish-language media" for being ideologically biased, complaining, "So much for the 'impartial media!'"

Media Matters reported that Outnumbered co-host Sandra Smith pointed to a survey of political coverage by right-slanted newspaper The Washington Examiner to use as a cudgel against Trump critics and rival networks like CNN.

That the Examiner, she said, found multiple instances of "media figures actively lobbying their peers to challenge Donald Trump more aggressively when interviewing him or his surrogates."

She pointed to Univision TV anchor Jorge Ramos' remarks about the Trump candidacy in which Ramos said "neutrality is really not an option" when dealing with the bellicose, race-baiting Republican nominee.

She went on, "And this from CNN media correspondent Brian Stelter, quote, 'We can't just let it seep into the discourse like it's normal. We have to stop and fact check and contextualize. Right now it’s the Republican candidate for president who is trying to delegitimize our democratic process without proof. It is unpatriotic for any journalist or any interviewer to help him.'”

Co-host Harris Faulkner accused Stelter -- host of CNN's Reliable Sources -- of trying to draw attention to himself and build his brand, which she said is the kind of behavior that makes people hate journalists.

"That makes me uncomfortable because it really tells me that, first of all, everybody's looking for their moment," Faulkner said, "and they're going to do it with a series of gotcha questions, which is exactly why the American public says that they don't trust journalists right now. They think that we're all cut from that cloth."

She complained that no one in the media is this hard on Democrats.

"(T)he other thing that’s really nasty about this whole thing," she said, "is that they're not going to apply that to both sides."

Guest host Guy Benson said, "There's always a double standard with Republicans and Democrats. It may be more pronounced this year for a number of reasons. And I'm all for the media very aggressively going after Trump and following up and holding him to account, but they have to do it to Hillary Clinton as well."

The group went on to cast aspersions on Ramos and, by extension, all Spanish language media, which they characterized as "ideologically liberal" and unapologetic about it.

Former MTV's The Real World cast member Rachel Campos-Duffy said, "(A)t least on the English side of news, we have Fox News, which is fair and balanced, it gives people a different perspective. There's nothing like that on the Spanish side, and that is why not just Donald Trump but all Republicans have had a difficult moment."

Watch the video, embedded via Media Matters, below:

The first month of Joe Biden’s administration could be the deadliest period in the nation’s COVID-19 pandemic, one of his top officials warned Sunday. Dr. Rochelle Walensky, who is nominated to lead the U.S. Centers for Disease Control and Prevention, expects the country’s coronavirus death toll to reach 500,000 by mid-February. That would be a jump of about 100,000 in just a few weeks since the number of confirmed deaths was just short of 400,000 on Monday. “By the middle of February, we expect half a million deaths in this country,” she told CBS’ “Face the Nation” on Sunday. The grim predict...

Mike Lindell, the Trump-loving CEO of MyPillow, made several bizarre claims this week in an interview with conservative talk show host Eric Metaxas in which he detailed how China supposedly stole the 2020 election from President Donald Trump.

While appearing on Metaxas's show, Lindell said that his own "research" has shown him that China turned a mysterious "wheel" that gave Biden additional votes.