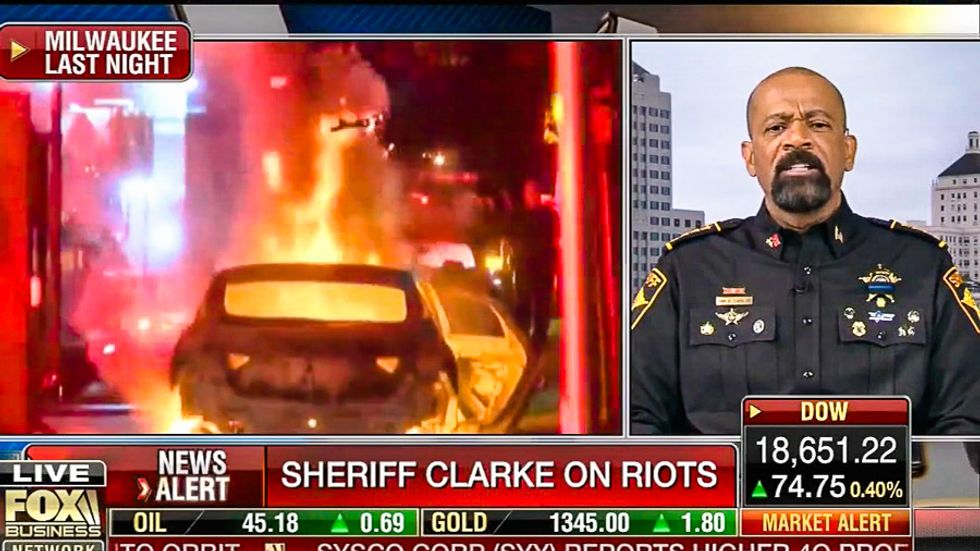 Sheriff David Clarke took time out of restoring law and order in Milwaukee, Wisconsin on Monday to blame riots in the city on liberals and "questionable lifestyle choices."

Just hours after requesting help from the National Guard to deal with riots stemming from an officer-involved shooting, Clarke made several appearances Monday morning on Fox News and Fox Business Network.

"What causes riots are failed liberal urban policies in these ghettos," Clarke told Fox Business. "Milwaukee has inescapable poverty. We're like the sixth poorest city in America. They have failing public schools... You have massive black unemployment... You have dysfunctional families, you have father-absent homes, you have questionable lifestyle choices."

"Those are the ingredients for for a riot," he insisted. "And then a police shooting comes along and just acts as an igniter to an already volatile situation."

Clarke pointed to "tribal behavior" as the cause of chaos in the wake of the officer-involved shooting.

"I feel for these individuals," he explained. "They might be unemployed but they're good law-abiding people and they need help. But they're not getting it from this Democrat [SIC] liberal class of politicians who have reigned over this thing for decades."

"Like I said, the economic state in Milwaukee today wasn't like this when I was growing up as a kid here," the sheriff opined. "This happened over time under their watch, pushing the growth of the welfare state."

Watch the video below from Fox Business News, broadcast Aug. 15, 2016.

Trump trashes Elon Musk's decision to buy Twitter: 'Only a fool would pay that price!'

According to Trump, "a lot of bad things are happening to Elon, he's got to be little bit careful."