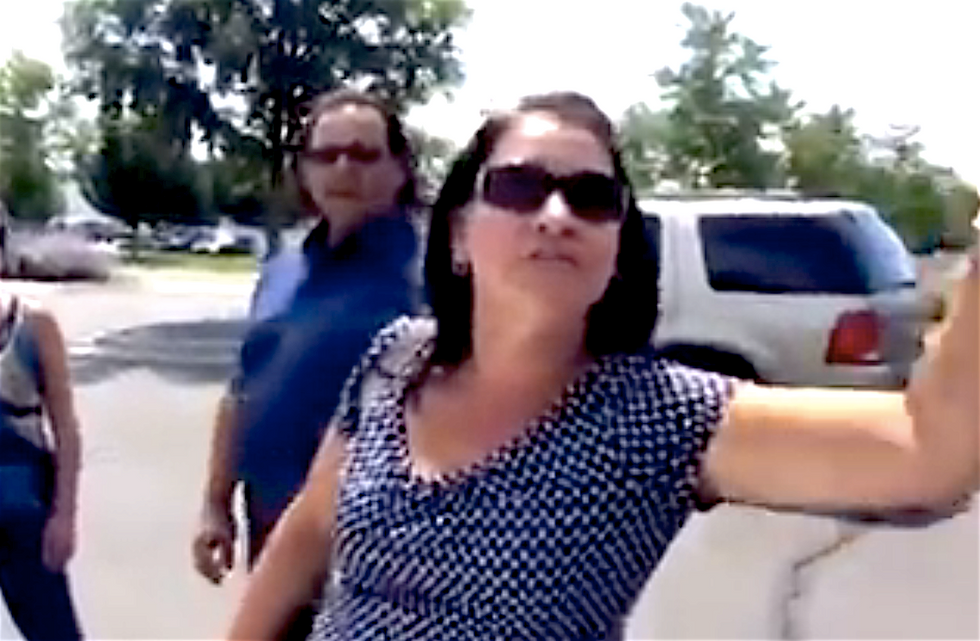 A group of Colorado women got caught on video having a racist meltdown toward a Latino family and now the clip is going viral.

According to Grand Junction's Daily Sentinel newspaper, Yolanda Flores and her son were paying a visit to the Mesa County Health Department so the boy could have a physical exam to prepare for the fall high school football season a group of women -- mostly led by a brunette woman in a blue and white zigzag patterned blouse -- blew up at them.

The women gathered near Flores' car because she had left a German shepherd in the vehicle with the windows rolled down. The women berated Flores with racial slurs for leaving the dog in the car, and told her 14-year-old son, Ahmed, that his dog was going to be taken away.

"You're the ones that give brown people a bad name," the woman said, pointing in Flores' face.

Then, pointing at the health department building, she said, "Just f*cking wanna get something for nothing," parroting the right-wing talking point that "illegal aliens" come to the U.S. and place a burden on social services. "Well, get your ass a job if you don’t have one.”

The group followed Flores and her son back and forth to their car and into the building. Flores began filming with her cell phone because she believed they were about to attack her.

“They started yelling at us,” said Ahmed, who can be seen crying in the video. “They followed us back to the building.”

Snapping her fingers in Flores' face, the woman in blue said, "Speak English, bitch! This is America! Down with Mexicans that don't learn the language of the world!"

Yolanda's daughter Wendy put the video on Facebook to show the world how her mother and brother were treated, in spite of the fact that the family has legally lived in the U.S. for more than 23 years.

“The worst thing is she talked as if she knew so much about my mother and she had everything wrong,” said Wendy to the Sentinel. “My parents are residents, they pay taxes, and she assumed that just because she speaks Spanish and looks Mexican, she’s a wetback. They judged her without even knowing her.”