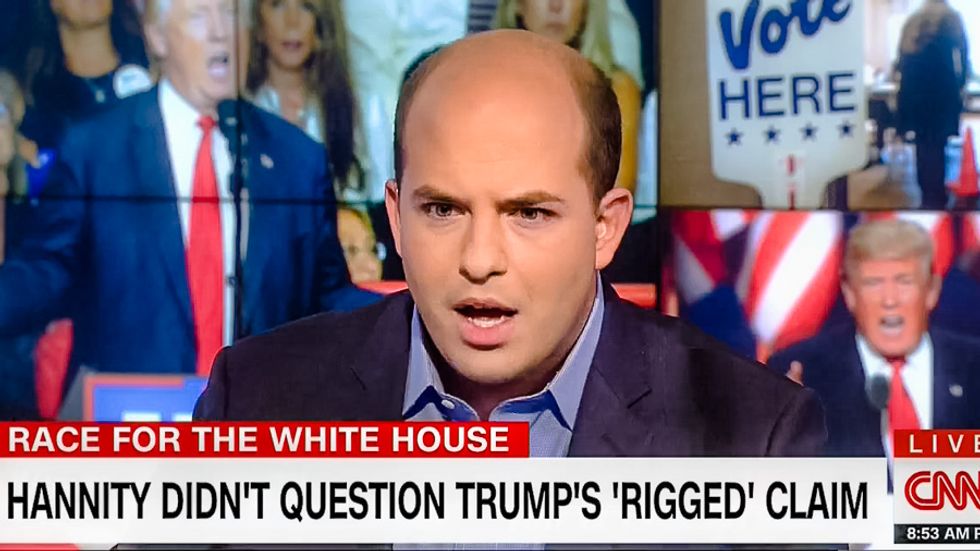 "This is a really troubling first for a presidential candidate," the CNN host lamented. "He's saying he's worried the election in November is going to be rigged against him."

Stelter argued that members of the media have a responsibility to "ensure everyone of the integrity of the voting system."

And he pointed to Trump's recent appearance on Sean Hannity's show as an example of "how not to interview a candidate."

"That's it?" Stelter exclaimed following a clip of Hannity failing to call out Trump. "If there were ever a time to challenge a candidate, that's the time! Don't feed me baloney about Hannity's show being only an hour long and that he might have run out of time. This interview was on tape."

"Interviewers, even ones that support the person they are interviewing, have an obligation to probe further and push back when a candidate says something dangerous, and this is dangerous," he continued. "Suggesting an election is going to be stolen? This is third world dictatorship stuff."

Stelter argued that journalists had a responsibility to push back on false claims before they "seep into the public discourse like it's normal. We have to stop and fact check and contextualize."

"The conservative media is vital here but Bill O'Reilly and Sean Hannity both failed their audiences this week," he observed. "Both men interviewed Trump. In both cases, Trump suggested there was something fishy about the voting in 2012."

Hannity went even further, Stelter noted, by backing up Trump's assertion in a later segment. According to Hannity, a number of precincts throughout the country in 2012 reported zero votes for GOP nominee Mitt Romney.

"Yes, Hannity, you are being conspiratorial," Stelter quipped. "A Google search would show that there are also precincts in other states like in Utah, where Obama did not get a single vote."

"Hannity is not a journalist," the media critic concluded. "But he has a megaphone and he's using his megaphone irresponsibly. If a Democratic candidate were saying this stuff, saying the election could be rigged, then every word of this essay would apply to him or her."

"But right now it's the Republican candidate for president who is trying to delegitimize our democratic process without proof. It is unpatriotic for any interviewer or any journalist to help him."

Within minutes, Hannity lashed out at Stelter on Twitter.