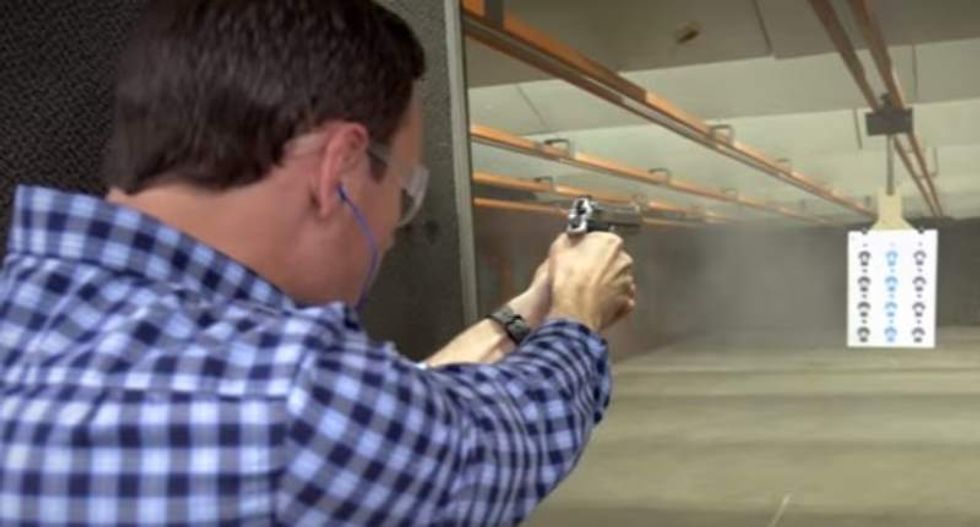 Wisconsin's 8th Congressional District is attracting quite a lot of attention.

As Wisconsin voters head to the polls today to pick nominees for US Senate and House races in the Nov. 8 general election, most of the attention is on House Speaker Paul Ryan, who is facing a noisy (but, polling indicates, unlikely to succeed) challenge from tattooed, sunburned, motorcycle-riding Paul Nehlen, whose rhetoric draws on that of Donald Trump. But a 150-mile drive to the north, in Green Bay and the surrounding area, another intra-Republican feud is drawing the attention of at least a handful of well-heeled observers both inside Wisconsin and beyond.

Three Republicans are fighting for the chance to run against Democrat Tom Nelson, a former state legislator, to represent Wisconsin’s 8th Congressional District in the US House of Representatives. Mike Gallagher, a former adviser to failed presidential candidate and Wisconsin Gov. Scott Walker, is a favorite among big-money backers, and has outraised his leading opponent, Wisconsin state Sen. Frank Lasee, by 3 to 1. Another Republican, Terry McNulty, trails in third place.

Wisconsin, an important state for both parties this fall, illustrates how much rides on the less-examined down-ballot contests. Donald Trump has targeted Rust Belt states — Wisconsin among them — as key to his electoral strategy. At the moment, FiveThirtyEight and other poll watchers give Clinton a solid lead in the state coming out of the Democratic convention and following a rapid-fire series of blunders from Trump. But no one can take anything for granted in deep purple Wisconsin: Though Obama won the state in the last two elections, his margin of victory narrowed from 2008 to 2012. The 8th Congressional District was one of those that voted for Obama in 2008 but switched in 2012 to his Republican opponent, Mitt Romney.

The state’s fickleness also is on display in the rematch for one of its US Senate seats: Democrat Russ Feingold, a liberal champion of campaign finance reform, is attempting to reclaim the post he lost six years ago to Republican Ron Johnson. The outcome of this race could very well decide which party controls the Senate, and determine how successful a President Hillary Clinton or Donald Trump is at implementing an agenda.

Documents on file at the Federal Communications Commission show that the National Republican Senatorial Committee already has scheduled more than $300,000 worth of ads through Election Day in the swing 8th Congressional District, with big buys this month, in September and another one for the closing weeks of the campaign. The NRSC’s top donors include a who’s who of corporate and conservative interests, including the company owned by Koch Industries, two companies affiliated with Sheldon Adelson, and the Show-Me Institute founded by conservative mega-donor Rex Sinquefield. The Democratic Senatorial Campaign Committee meanwhile, has reserved airtime on the Green Bay Fox outlet for the final three weeks of the campaign. The DSCC’s major contributors include labor union, law and lobbying firms, and companies affiliated with liberal mega-donors such as George Soros, Fred Eychaner and James Simons.

Democrats also hope Trump’s divisiveness will help them to make up some ground in the House, where the party is dramatically outnumbered by Republicans. Districts like Wisconsin’s 8th will be key to that strategy. It will be an open seat, as incumbent Republican, Reid Ribble, is retiring and respected political handicappers Charlie Cook and Stu Rothenberg both rate the fall race a tossup. House Majority PAC, a Democratic super PAC, has also reserved airtime for a final pre-Election Day push on the Green Bay Fox station.

The Democratic Congressional Campaign Committee, a group that has funneled hundreds of millions of dollars to candidates in years past and spent more on television ads supporting them through a related group, has already announced it will back Nelson, as part of its “Red to Blue” program to take back the House. The DCCC has spent more than $300,000 to reserve time for some 92 spots on a Green Bay NBC affiliate in the closing weeks of the campaign, FCC documents show. Much of the DCCC’s money comes from senior members of Congress — led by former House Speaker Nancy Pelosi (D-CA) — who are interested in regaining the House majority and the power it would give them.

So Republicans will have to come up with a strong candidate to put up against Nelson, and that may explain the money flowing into the race, both from local interests — including clinics, grocers and a fish market — and DC lobbyists and large Republican donors. Uline, the packing material corporation owned by the Uihlein family, major GOP donors, seemed to hedge its bets by donating $5,400 each to both leading Republicans, Lasee and Gallagher.

In addition to his fundraising lead over Lasee, Gallagher is benefiting from spending by a dark-money group, Midwest Growth PAC, that does not reveal its donors. The group has reported spending $48,660 on “mail” in support of Gallagher and opposing Lasee. It is, however, incorporated under the 501(c) section of the tax code and is only required to report election-related expenses to the FEC within 30 days of a primary election — so it is entirely possible that it has spent far larger sums than we can know to help Gallagher win. Jason Stein of the Milwaukee Journal Sentinel writes that the group’s treasurer is a close friend of and former campaign contributor to John Gard, an influential lobbyist and former state Assembly speaker. Gard once lobbied for a law requiring a prevailing wage for construction workers on state projects that was scaled back by Lasee — possible background for why there might be animus between the lobbyist and the state senator.

In addition to being outspent, Lasee’s campaign has hit another speed bump: Local media have been poking fun of the fact that Lasee may not spend much time in the district — may not even “live” there at all — after an ad for his condo surfaced on AirBNB for $210 a night. Lasee chalked it up to a “crazy” living arrangement, claiming he spends most of his time in the district, though he occasionally sees his wife, who owns a much larger home in Racine.

John Light is a writer and digital producer for the Moyers team. His work has appeared at The Atlantic, Grist, Mother Jones, Salon, Slate, Vox and Al Jazeera, and has been broadcast on Public Radio International. He's a graduate of Columbia Graduate School of Journalism. You can follow him on Twitter at @LightTweeting.

This story originally appeared at Moyers and Company.

The Covid-19 pandemic took a deadly toll on adults in the United States for two years while largely sparing children from the dire statistics.

But the rapid spread of the Omicron variant led to record pediatric infections and hospitalizations in the country, and anti-vaccination misinformation that tells parents the shots are dangerous is adding to the risk.