How to fight back against narcissistic presidential candidates, crazed bosses & other bullies 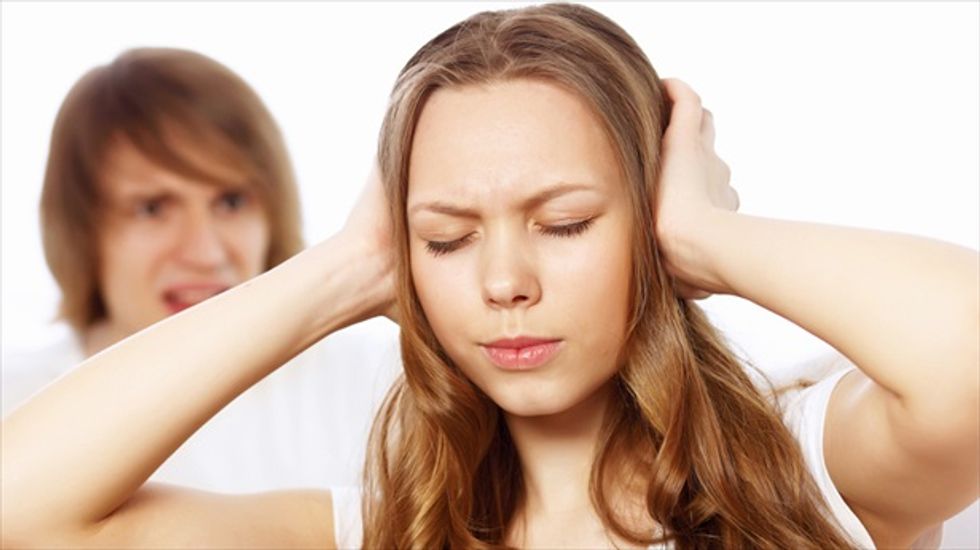 This week, Donald Trump invited "Second Amendment Folks" to take care of any potential issue posed by Hillary Clinton's ability to select justices to the U.S. Supreme Court should she become president. Despite the fact that we have all watched the video, and Trump's intent was clear, now we're supposed to understand that it was nothing but a poor joke. Which is what we were supposed to understand about his remarks when he asked Russia to hack Clinton's e-mails.

If Donald Trump's "Can't you take a joke?" behavior is suddenly reminding you of a fight you had with an ex, or making you wonder if you're the crazy one, you're not alone. A lot of us have experience dealing with folks whose tactics in conversations, or arguments, or fights result in us feeling somehow, for lack of a better word, icky, afterward. There are a variety of names for these tactics. Gaslighting. Projection. Ad hominem. Word Salad. Generalization. Lists of these tactics exist. But rather than focus on the crap that people can dish out, here at Raw Story, we thought it more valuable to put together a list of techniques for maneuvering out of the way of the corkscrew trajectories of the arguments by those difficult people in our lives.

Call out the abuse for what it is. It is okay to say, "Denying reality is not going to change the fact that my feelings are hurt." If you are trying to have a discussion about hurtful behavior, for example, and someone questions your memory of the event itself, rather than getting caught up in a debate about whether your memory is trustworthy, remind the person that the conversation is about the hurtful behavior.

Affirm for yourself that your reality is real. This can involve writing things down, sharing events with a friend, making a timeline, and, silly as it may sound, making self-affirmations of your own trustworthiness.

This is one of those situations where it's best just to disengage. It is a waste of energy  to try to unpack the picnic basket of words you've been handed; by the time you've deciphered one nonsensical sentence, another one will be on its way. You have better things to do with your time. Remove yourself from the conversation and walk away. If you can't walk away, disengage from the conversation and think of something else. The person you're engaged with is not interested in having a conversation with you. They are interested in hearing themselves speak. Once it's clear that no one is listening, the words should dry up.

Blanket statements also work to make individuals feel isolated and invalidated.  In each case, it's important to focus on the specifics of what was said. Remind the person who is trying to shift the conversation to the blanket statement that the individual issue that was the original premise is what is being discussed. Refuse to engage on the level of the absurd.

In the case of your unreasonable boss, Forbes recommends that you take a deep breath and look at the assignment, your schedule of already assigned jobs, and the time allotted. Make a list. If it is clear that this is not a case of being overwhelmed because you've been given new responsibilities and you're feeling some normal anxiety in response to that, but rather, that you're being set up for failure, marshall your resources. As soon as you can -- and early in the process -- go talk to your boss and, with your chart, show the challenges that you've been presented with. You can show your boss that the work is do-able, and that you are in control of it, but that you need to work with them to set up a timetable that is going to be successful. This will allow you to establish yourself as the confident, in-control employee who knows what they are doing because of past experience.

At home, you'll have to use that same technique of self-confidence to remind yourself that the unreasonable expectations are not coming from you: they are external. The person who is never happy with what you've accomplished and seems to constantly change what they're expecting of you is chipping away at your confidence. So, self-care, in the form of validating your own success and self-acknowledgement of what you have accomplished is going to be important. In other words, take comfort from your own accomplishments and do not rely on this toxic person for affirmation of your goals.

When I taught college courses, one of the rules in my classroom was that I would not tolerate ad hominem attacks. As I explained to students, if your disagreement with someone's argument leads you to attack the person making the argument, you have lost and now you are seeking to hurt the other person. That type of behavior is intolerable. So why would you stay and put up with it should you find yourself in that kind of situation yourself? It is okay to say to the person, "This is intolerable. You are now name-calling. You have hurt my feelings. I am walking away from this conversation." Again: in dealing with these types of personalities, hearing the sound of their own voices is part of their power. If they're speaking in an empty room, they can lose interest.

And if that name calling turns into threats. Leave. Immediately. If the threats are violent in nature, report them to the police. You do not have to put up with having your physical safety threatened because you are dealing with someone who cannot stand losing an argument.

Shahida Arabi has some fantastic  suggestions for self-care. While some of us hear "self-care" and immediately think of Stuart Smalley speaking to himself in a mirror, Arabi's definitions of self-care are much more holistic. They include pursuing our passions, participating in activities that give back to the communities we live in, and reminding ourselves in myriad ways that just as we observe compassion toward others, we need to do that with ourselves.

When faced with the assholes of the world, the answer is not to turn their anger inward toward ourselves, it is to increase our compassion for ourselves, strengthen our sense of self-worth, so that we may walk away from our abusers and continue to do good out in a world that needs all the love and help that we can give to it.