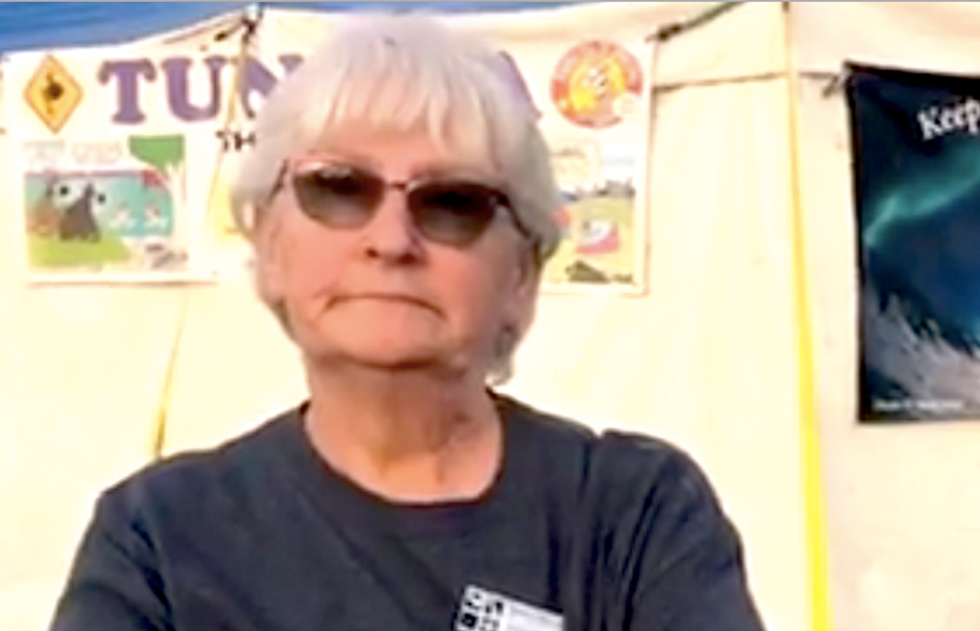 Organizers of an Alaska state fair have come under fire after a seemingly arbitrary decision to abruptly end a rap group's set and eject them from the festival.

The Alaska Dispatch News reported that rappers Bishop Slice and Starbuks -- both from Fairbanks -- were invited to perform at the Tanana Valley State Fair last Thursday, but midway through their set, the fair's manager cut power to the stage and ordered the performers to leave.

Starbuks, whose real name is Michael Cofey, took out his camera to film his interaction with fair manager Joyce Whitehorn as he tried to get an explanation from her about why she cut the group's set short. He broadcast the incident live on Facebook as it unfolded.

"What I'm starting to personally think, the way you approached this initially, the stage was just a little too dark for you," said Cofey, meaning that she had an issue with the fact that he is black and Bishop Slice -- whose real name is Julian Lillie -- is Alaska Native.

As he attempted to get an explanation from Whitehorn for why he was getting kicked out of the fair for performing music he had been invited there to perform, she crossed her arms and shook her head at him.

"You're a really good speaker," Whitehorn said, "but I'm sorry, that's the way the rule is."

The video spread quickly online and the Tanana State Fair Facebook page quickly filled up with angry accusations of racism on the part of the fair organizers.

Whitehorn denied on Sunday that racism had anything to do with her decision to cut the power and end the rappers' performance, which she said was about the duo's use of "inappropriate language" in front of children. It had "nothing to do at all about racial anything," she insisted.

The pushback, she said, has been vicious.

On the fair's Facebook page, critics of the decision are sounding off.

"WELL, I got to hand it to you. You've managed to make a bad fair even worse by driving people and performers away in droves," wrote one resident. "MANAGEMENT NEEDS TO BE REPLACED or our poor fair is just going to shrivel up and die. they are putting the nails in the coffin."

Under a photo of an all-white jazz combo, a commenter wrote, "Jazz is negro music. Negro music isn't allowed at the fair."

Under a photo of black gospel performer Willa Watts, a commenter wrote, "Omg change can happen they finally posted a photo of a person with color *slow golf claps in the background*"

Another said, "I'm pretty sure she was singing God Bless The USA and something about all our Freedom."

To which the response was, "I hope she didn't rap."

Isaac Paris -- the festival's music organizer -- told the Dispatch that a number of performers canceled their appearances at the festival as word got around.

"There were 17 performances scheduled today and four of them canceled," he said on Sunday. "I had five cancel yesterday."

He said that he's "embarrassed and frustrated" by the festival's actions and still doesn't understand why the rappers were forced to leave the fairgrounds when their set was cut short.

Lillie said in an interview that he's performed at the fair for four years running and always takes extra care to tailor the set to an audience that could include children.

Cofey said that his attempts to get an explanation for why his performance was censored were in vain, that Whitehorn stonewalled him and then had him ejected from the premises by security guards.

Whitehorn, he said, "might not be a racist...but there was definitely a social disconnect."

Watch Cofey's Facebook Live video about this story, embedded below: