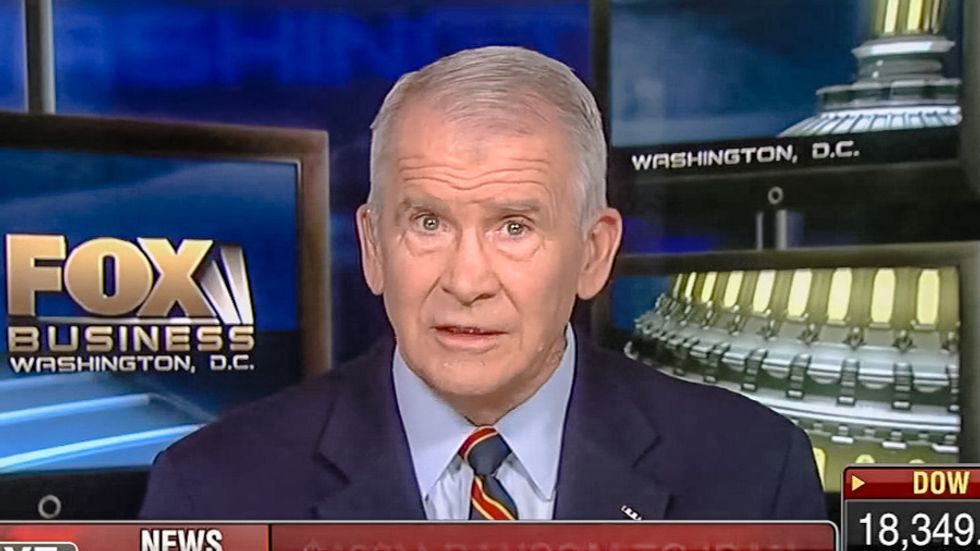 Ret. Lt. Col. Oliver North, who was convicted of felonies related to the illegal transfer of weapons to Iran under President Ronald Reagan, lashed out at President Barack Obama on Thursday over $400 million in cash that was delivered to the Iranians.

Conservatives this week accused the president of paying a "ransom" to Iran to release four Americans because of the timing of the delivery of $400 million that had been earmarked as reimbursements for weapons the U.S. never delivered after the country's 1979 revolution.

The White House has insisted that the payment was not part of a quid pro quo arrangement in connection with the prisoners' release, but Republicans have noted that it took place just four days after the Americans were freed.

"You're talking to a guy who's done it," North quipped. "I've been there, done that. A little differently than these guys did it."

"This administration has deceived and dissembled repeatedly since 2009," he insisted. "Fast and Furious, the gun walking case, IRS enemies list, Obamacare -- did you get to keep your doctor and your health plan -- the Benghazi lies before, during and after the cover-up. And of course, we've got an existential threat with the nuclear weapons deal that was done with Iran."

"All because this administration has bent over backwards to give the Iranians whatever they want."

North noted that Iran had asked for the money to be returned as far back as 1979, and he charged that the Obama administration was "bending over backwards to support the Iranian regime."

North was convicted of three felonies in 1988 related to the Iran-Contra affair. His convictions were later overturned in 1991 on the grounds that members of the prosecution used his congressional testimony to help convict him. He now hosts War Stories with Oliver North on the Fox Business Network.