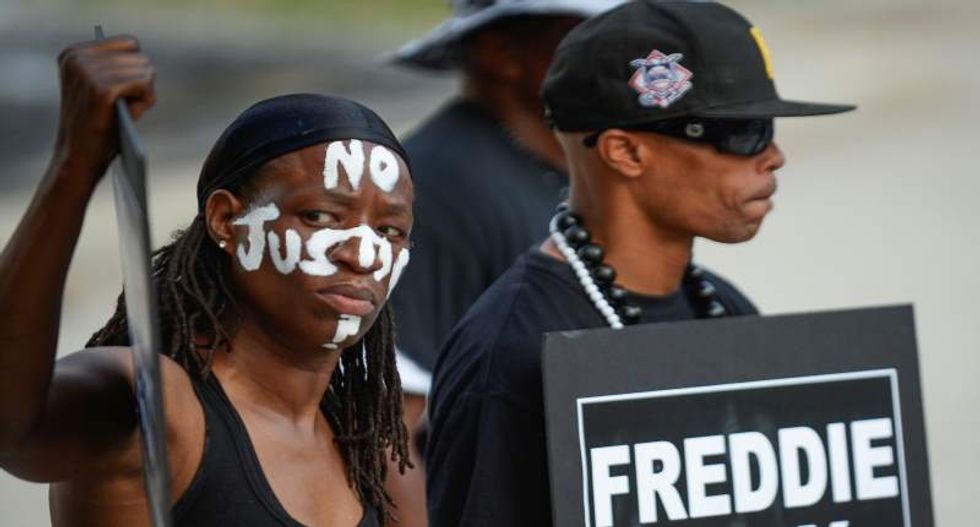 Angel Selah (L) and local artist PFK Boom gather to remember Freddie Gray and all victims of police violence during a rally outside city hall in Baltimore, Maryland, on July 27, 2016. (Reuters/Bryan Woolston)

BALTIMORE — The conclusion by the Justice Department that the Baltimore Police Department routinely violated people's civil rights is expected to launch a reform process that is likely to take years and cost tens of millions of dollars. Dozens of similar reviews around the country suggest a road map for the city. In some cases, senior…

Trump faces high-stakes testimony in lawsuit — and 'even a single misstep could be costly': NYT

The New York Times has written a lengthy preview of former President Donald Trump's upcoming testimony as part of an investigation by the New York Attorney General's Office into his business practices.

The Times notes that Trump's history of depositions shows him to be combative and aggressive, despite the fact that "even a single misstep could be costly" to him financially.

One of the Capitol attackers that brought a handgun to the riot on January 6, Guy Reffitt, was sentenced in court on Monday to a little over 7 years in prison. Among the things that Reffitt was caught on video threatening is that he wanted to kidnap House Speaker Nancy Pelosi and drag her down the steps of the Capitol.

When speaking about the sentence, "The View's" Whoopi Goldberg introduced the segment by noting the length of his sentence to applause from the audience.

Embattled conspiracy theorist Alex Jones on Tuesday said that the judge who is trying a case against him was "demonically possessed" and part of a "cult."

For the second day this week, Jones skipped portions of his Austin trial, which will determine damages after a judge found him guilty for defaming victims of the Sandy Hook massacre.