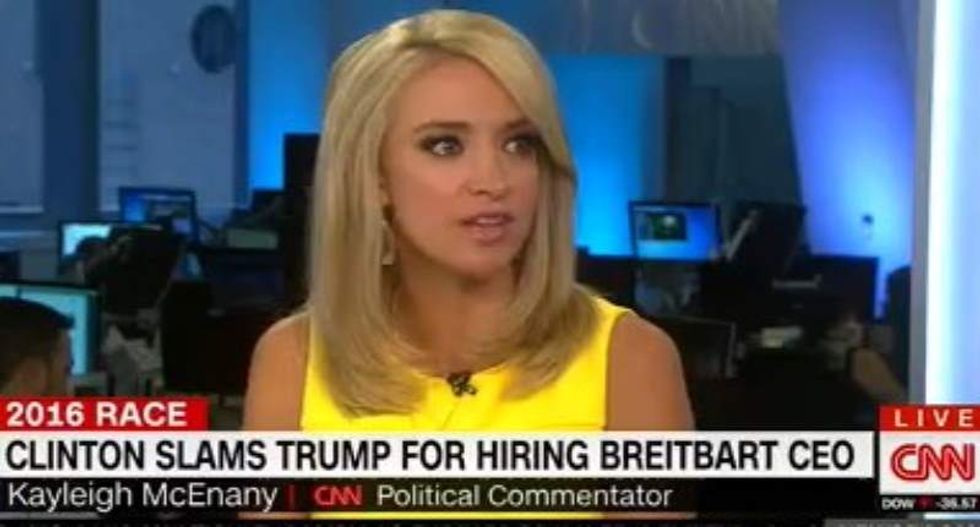 Kayleigh McEnany tried to defend Donald Trump during a CNN panel on Thursday by quoting Martin Luther King Jr. It did not go well.

"He is trying hard to be inclusive," she said of Trump before calling Hillary Clinton's speech linking Trump to white nationalists "divisive."

McEnany's invocation of the slain civil rights leader prompted an audible scoff from Democratic strategist Symone Sanders, as well as a rebuke from Guy Cecil, who leads a pro-Clinton super PAC.

"I always enjoy when a Trump supporter wants to ignore his record and then quote Martin Luther King," he said. "Martin Luther King would not have kicked African-Americans off of a casino floor because a gambler wanted him to."

"Martin Luther King would never have put a 'C' on the top of rental applications and prevented African-Americans from renting from him," Cecil continued.

"That was never proven," McEnany replied.

"Martin Luther King would not have sat on the stage and ridiculed and demeaned Muslims," said Cecil. "He would not have insulted a Hispanic judge who was born in America who just happened to be of Mexican heritage. The idea that Donald Trump should get pats on the back because he sat on a table with six African-Americans --"

"This is so unproductive," McEnany complained. "This is what's wrong with this election."

However, Cecil continued making his point, referencing a recent poll from Quinnipiac University.

"Sixty percent of Americans believe that Donald Trump traffics in bigotry, and a majority of independent voters said the same."