Lewis Black goes off on the elections: 'Just shut up! It's the f*cking summer!' 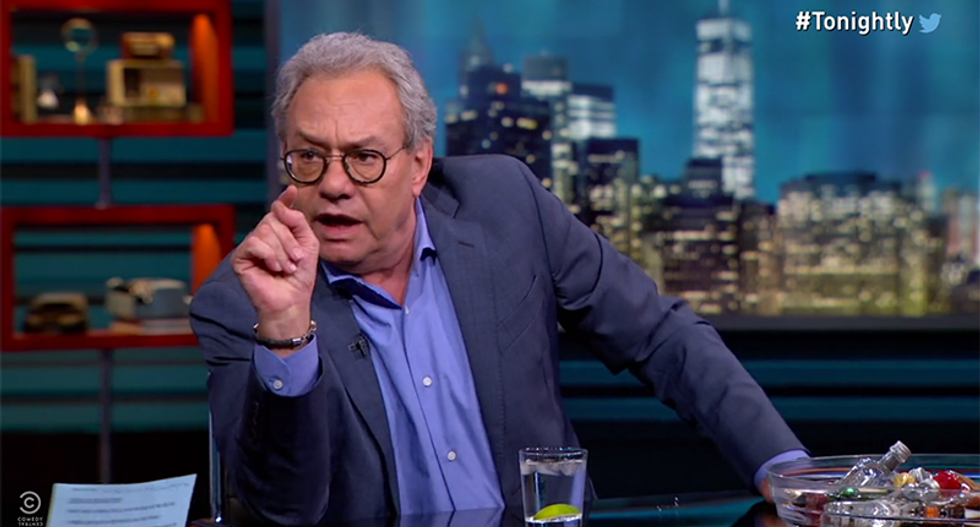 The night before Larry Wilmore's final show, the host revealed that not only has Samantha Bee sent him several boxes of "cable network wine" but friend Stephen Colbert sent the good folks at "The Nightly Show" a case of tiny hard liquor bottles.

A big bowl of the liquor bottles sat in the middle of the panel table and Wilmore admitted he has "zero f*cks to give at this point. But I have plenty of booze to give."

When asked about his take on the election, comedian Lewis Black admitted, "it has to stop! It’s over and over and over and over, every day!” He shouted, before going into a hilarious mumbling fit of cartoon sounds. "It's a vomitorium! We'd be better off as a people if they'd just covered it and went, 'Okay, here's Donald Trump,' and had a duck that was quacking. Quack, quack, quack. And Clinton as a chihuahua, and you heard barking arf, arf, arf! It's senseless!"

Black argued that he's fine with long campaigns, but demands that they shut things down between Memorial Day and Labor Day. "Just shut up! It’s the f*cking summer!” Summer isn't just for kids to go hang out in the pool, it's for adults too. "It's our time! Don't bother me!" Black shouted.

Panelist Ricky Velez admitted he felt exactly the same as Black, but thought ahead and nabbed a Xanax prescription to navigate the horrors of the 2016 election season. "We're so high, we're going to show up to work on Monday," he joked.

Once Trump began referring to Mexican immigrants as “raping and pillaging” across the border, “any party with any moral compass whatsoever would go, ‘You know what? You can run. You just can’t run as a Republican,’" Black continued. "But that was the moment in time when people began to watch and went, ‘Wow! Boy! This is great! This will be fun to fucking watch!’”

Check out the full video of Black's antics as he sends Wilmore into hysterics below: