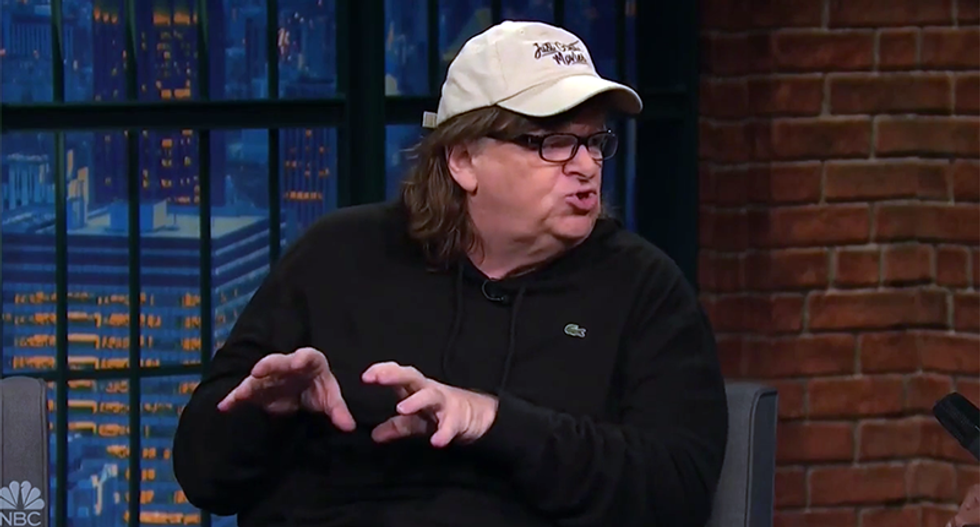 Trump told producers he was nervous to appear with Moore and threatened to walk out on the show. Moore, understandably, felt guilty and went over to try and reason with Trump and put him at ease.

“So I walk over to him, and I said, ‘Mr. Trump, it’s Michael Moore.’ And I shook his hand, and it’s all clammy.” Moore said, before adding “I don’t remember the size of the hand.”

Moore had just filmed the documentary Roger and Me about General Motors CEO Roger Smith and the plants he closed down in Flint, Michigan, during the mid-1980s.

“I’m having to talk him off the ledge from this,” Moore continued. “You know, grow some gonads here.” As a result of Trump's "fears" Moore was much nicer to Trump on the show, instead of hitting him hard about corporate practices. He admitted that it was years later he realized Trump "played" him. “I felt sorry for him, and the hands were so wet!” Moore explained.

Trump was a different person in the late 1990s, however. Moore recalls that the New York businessman “was extremely progressive," he described. "He was saying we should invest more in education, and we need health care. He said all the things that Hillary’s saying. That’s why I know that it’s just a con. The whole f*cking thing. It’s a scam, a con, and it’s rigged.”

Moore wrote an op-ed earlier this month in which he alleged an unnamed source informed him that Trump was only running for president as a publicity stunt. Over the weekend, Moore and comedian pal Bill Maher somehow managed to get onto the runway at LaGuardia Airport, where Trump parks his private plane. The two shot photos pretending to capture Trump's tax returns.

Check out the interview courtesy of the DailyBeast: Appearing on MSNBC early Sunday morning, a former adviser to President George W. Bush claimed Donald Trump's threat to form a third party is actually aimed at keeping Republicans under his control as he builds a permanent Trumpist wing within the party.

"You had Congresswoman Debbie Wasserman Schultz (D-FL) on earlier, and one of her comments that I really enjoyed was the fact that Donald Trump's biggest threat is anonymity -- going off in the silence," Farner began. "That's what he's afraid of. He needs the Republican Party in order to gain his followers. He doesn't have his bully pulpit on Twitter anymore."

"He needs to get involved in the primaries to get his name and face out there, his message out there, in order to drive up more of his cult of personality," he added. "And it's -- he's building his own party within the Republican wing: Trumpism, the cult of personality, whatever you want to call it. It's dangerous to democracy and we encourage the Republican Party to go back to its roots to follow leaders like [Rep.] Liz Cheney (R-WY) standing up to bullies like Donald Trump and looking out for the future of America."