'My letters are the greatest': Tampa man channels Trump in hilarious viral letter to the editor 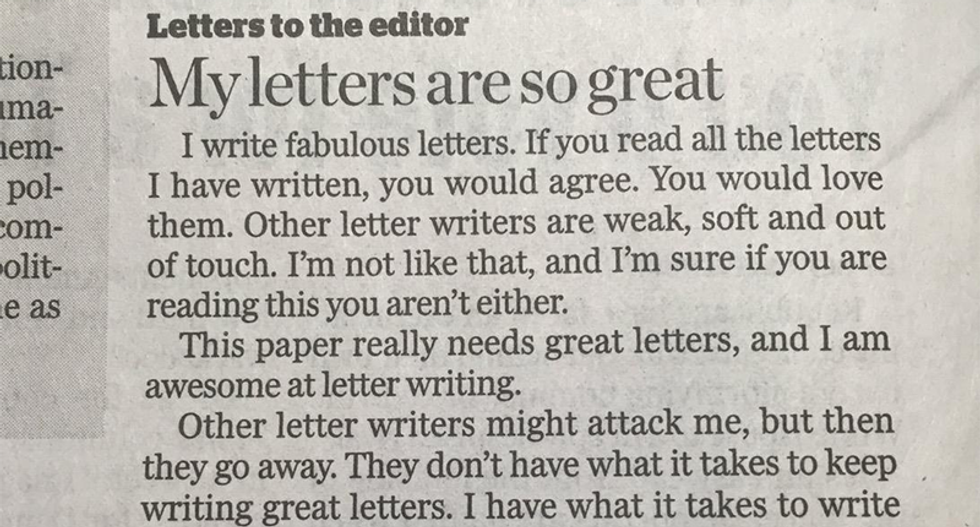 Terry Vaught's letter to the editor of the Tampa Bay Times (Photo: Facebook)

A Tampa Bay man's letter to the editor is going viral after he declares his "fabulous" letter writing skills result in the "greatest" letters to the editor.

Terry Vaught sent his letter to the Tampa Bay Times attacking other "weak, soft" letters that often get chosen to appear in the daily newspaper. When the paper reached out to Vaught about the attention he was garnering, he expressed his displeasure that the letter wasn't more prominently displayed, "obviously."

His letter was titled "My letters are so great," and makes a tongue-in-cheek plea to make letters great again.

"I write fabulous letters," Vaught wrote. "If you read all the letters I have written, you would agree. You would love them. Other letter writers are weak, soft and out of touch. I'm not like that, and I'm sure if you are reading this you aren't either.

He continues, encouraging those who write letters to the editor to step up their game. "This paper really needs great letters, and I am awesome at letter writing," he wrote.

As for those who write those lousy letters, Vaught dismisses them and their attacks. "Other letter writers might attack me, but then they go away. They don't have what it takes to keep writing great letters. I have what it takes to write the best letters," he declared. "Letter writers who disagree need to be punched in the face and run out of town."

Vaught was confident that his letter would be selected because true excellence demands it. "I guarantee this letter will be picked as the letter of the month. If it isn't picked, it will prove that this letter writing contest is rigged."

If those attacks sound familiar it might be because Republican Party candidate Donald Trump has made similar comments over the last week about his own excellence and about the election being "rigged" if he loses in November.

Jim Romanesko, who comments on the media and mocks unfortunate headlines, shared a capture of the letter and it has been shared over 5,000 times in just eight hours.

"I think that's obvious, but I'm disappointed that part of it was edited," he told the Tampa Bay Times. "I also wrote, 'My letters are so great I'm going to build a wall and put my letters on them. Then I'll get the other letter writers to pay for building the wall.'"

Vaught was displeased his letter didn't win the paper's Letter of the Month for August outright.

"Of course, it should have been, what do you think? I'm the best letter writer of them all," Vaught told the paper through laughter.