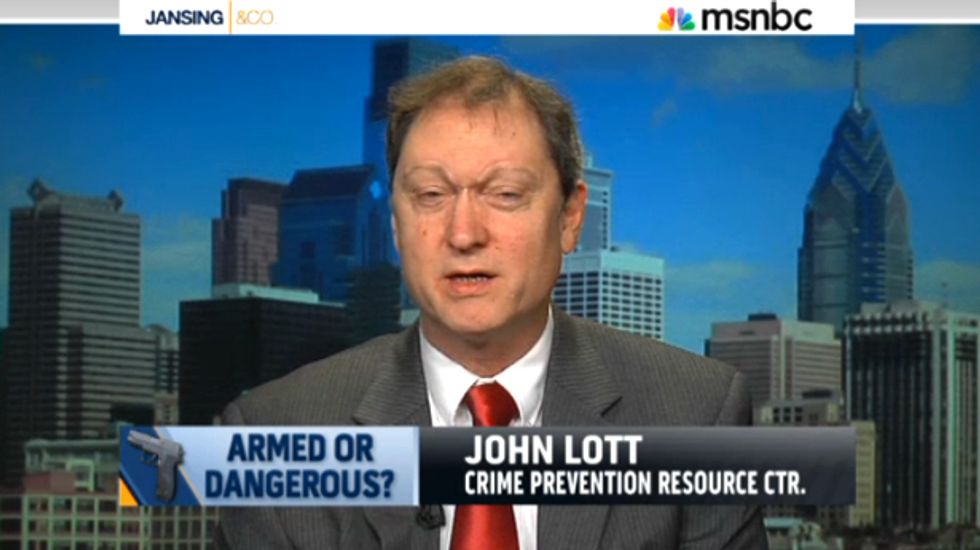 Pro-gun author and columnist John Lott is frequently held up as an intellectual luminary on the right, but ten years ago, his habit of falsifying data and leaning on intellectually dubious studies to prop up his arguments had left his career "in tatters."

Think Progress reported Friday that Lott has staged a career comeback by speaking out against gun regulation in the wake of the massacre at Connecticut's Sandy Hook Elementary School. His contention that more guns make societies safer has made him a favorite of the National Rifle Association and other pro-gun agencies.

However, as Devin Hughes and Evan DeFelippis wrote, before he became the darling of the pro-gun right, "Not only was Lott’s assertion that more guns leads to more safety formally repudiated by a National Research Council panel, but he had also been caught pushing studies with severe statistical errors on numerous occasions. An investigation uncovered that he had almost certainly fabricated an entire survey on defensive gun use. And a blogger revealed that Mary Rosh, an online commentator claiming to be a former student of Lott’s who would frequently post about how amazing he was, was in fact John Lott himself. He was all but excommunicated from academia."

Lott founded the Crime Prevention Research Center (CRRC), a think tank designed to push his debunked theories on a new audience. Broadcast media -- eager to find someone who seemed authoritative who preach the pro-gun gospel in the wake of Sandy Hook -- took Lott at face value, believing his falsified claims and giving him columns and guest spots with "the Washington Post, the Wall Street Journal, LA Times, Politifact, CBS,  CNN, Fox News, and many others."

Hughes and DeFilippis did their own independent verification process on Lott's claims, combing back over his career and checking his work. They found a "startling array of new ethical violations, ranging from the profoundly bizarre to the outright fraudulent."

They presented the five worst, which included falsely claiming that a Lott essay was published in a "peer-reviewed journal," lying about the number of mass shootings in the U.S. versus Europe, making deliberate misreadings of the center's own analyses, lying about the number of deaths in "gun-free zones," and, again, creating an echo chamber by posing as fans and supporters online.

The last claim is perhaps the most entertaining. In spite of having been thoroughly shamed for his creation of former student and adoring fan Mary Rosh, Lott engaged again in attempting to sing his own praises by writing under an assumed identity.

In August of 2014, FoxNews.com published the "harrowing story about teenager Taylor Woolrich’s desperate attempts to escape and protect herself from a persistent stalker who was ruining her life." The story went viral and became a cudgel for open carry activists who believe that people need guns to feel safe.

The problem is that Woolrich -- a real person, unlike Mary Rosh -- told BuzzFeed that she didn't write the piece. Lott seized on to her story and exploited it, writing the piece from her perspective while plagiarizing one of his Daily Caller editorials almost word-for-word.

“I was trying to be brave and just speak up,” Woolrich later said. “I didn’t realize I was being turned into an NRA puppet.”